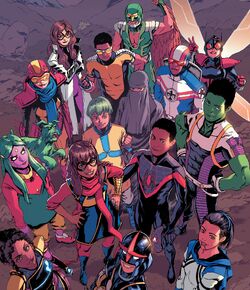 We see it all around us more and more every day -- people with power punching down. Taking lives when they don't have to. Meeting unarmed perps, even unarmed kids, with lethal firepower. That's the world we're inheriting, where violence does all the talking. But we can be better than that. We have to start enforcing justice without unjust force. What happened here today was sickening. And stuff as bad -- worse -- happens every day in this world. The strong abuse the weak -- who have to worry more all the time about who they can trust and who they can't. You want that to change? Us, too. We're in a war for a better tomorrow. Join us. Help us to not take the easy road, and I promise we'll fight every fight they can throw at us. Help us win the hard way -- the right way -- not with hate, not with retribution, but with wisdom and hope. Help us become champions.

The Champions were formed following the departure of Ms. Marvel, Spider-Man and Nova from the Avengers, when the trio became disillusioned by the behavior of their elders, especially in regards to the second superhuman Civil War. The young heroes desired to rectify the state of distrust by the people towards superheroes in general, and soon recruited other teenagers with similar ideals, the new Hulk, and Viv, daughter of the Vision.[5]

After their first joint mission rescuing a group of girls being trafficked by Pagliacci, the young heroes revealed themselves to the public and Ms. Marvel proclaimed the team's mission to foster a better tomorrow through hope and wisdom rather than unjust force. Her speech became viral on the Internet, and the team was dubbed the "Champions" in social media.[5] One of the people encouraged by Ms. Marvel's speech was the time-displaced young Cyclops, who was admitted into the Champions' ranks after requesting membership.[6]

In their further early adventures, the Champions traveled to Sharzhad and helped a young girl named Amal stop militant fundamentalists from enforcing a gender apartheid;[7] they were confronted by an Atlantean colony while cruising over their waters;[8] and were joined by teenage hero Gwenpool in fighting the xenophobic head of Daly County's police, Sheriff Studdard.[9] During the Leviathon Tide's invasion on Earth, the Champions crossed paths with the Freelancers, a group of teenage mercenaries, who were at the time working for Roxxon to silence protesters.[1] The Freelancers' employers would make efforts to discredit the Champions, framing the young heroes for attacking homeless people,[10] and later trademarking the Champions' logo. The Champions managed to clean the name, and Nova started a countermovement to reject the Champions-branded merchandise.[11]

When Hydra assumed control of the United States of America under the leadership of an evil alternate version of Captain America, the Champions were separated. Nova became trapped beyond the Planetary Defense Shield in Earth Orbit.[12] Ms. Marvel worked with the Warriors to fight off Inhuman internment camps,[13] and Scott was displaced to New Tian with America's mutants.[14] Amadeus, Viv, and Miles eventually joined the Underground where they associated with Ironheart, and the new younger incarnations of Wasp, the Falcon and Patriot.[15]

After Hydra leveled Las Vegas, Black Widow set out to assassinate Captain America. Spider-Man joined her, having decided to stop running away from his supposed destiny to kill Captain America, as prophesied by the Inhuman precog Ulysses Cain. The remaining Champions, alongside Ironheart, the Wasp and the Falcon, followed him to offer their support, thus joining Black Widow's Red Room.[16] The teenagers were eventually captured by Hydra after Widow's assassination attempt failed and resulted in her death. Spider-Man almost killed Captain America, but the Wasp convinced him not after learning that Black Widow had tried to kill Rogers so that Miles wouldn't.[17] When the contingent of super heroes launched a final attack on Hydra, the Red Room was freed by Taskmaster and Black Ant, who decided to switch sides in light of Hydra's eventual defeat. The Champions were reunited during the final battle,[18] which saw the return of the real Captain America and fall of Hydra.[19]

The Champions next saw themselves forced into an uneasy alliance with the Avengers[2][20] to stop the High Evolutionary from causing a collision between the Earth and his Counter-Earth. After being turned into an ordinary human by the High Evolutionary,[21][22] Viv became trapped in another plane of existence while operating a device to foil the villain's plans. The Vision built a Viv 2.0 to cope with Viv's apparent death before Viv found her way home.[23] The two twins co-existed for a brief time until Viv 2.0 went haywire and Viv killed her in self-defense.[24] The Vision and the Wasp managed to rebuild her body, but couldn't bring back her mind. As a way to both regain her powers and ensure her sister lived on through herself, Viv transferred her consciousness to Viv 2.0's body.[25] During this time, the Champions refrained from welcoming Viv 2.0 into the team taking into account Viv's feelings, and decided instead to invite Ironheart, Patriot, the Falcon, and burgeoning new hero the Locust, to compensate for their diminished manpower.[26] Following Viv's return to the team, Cyclops saw himself forced to leave the Champions due to a call to arms from his fellow time-displaced X-Men.[25]

After joining the ranks of the Champions full-time, Ironheart and the Wasp helped Amadeus Cho create the Champions Mobile Bunker (C.M.B.), a new moving headquarters equipped with a command center plugged into worldwide news to facilitate the team's response to crises. During an investigation in Nunavut, Canada,[27] the Champions stumbled into the machinations of Eshu, the Master of the World,[28] and uncovered his capture of a local teenager named Amka Aliyak, who had become infused with the Inua spirit Sila, from whom Eshu was leeching off energy for his machinery. Amka escaped from Eshu's captivity, and joined the Champions, using the shapeshifting powers bestowed upon her by Sila to become the super hero Snowguard.[29]

The Champions became involved in an attempt of the Warbringer to cull his fellow Chitauri for serving Thanos after Nova was alerted of the Warbringer's assault on the Nova Corps on his way to Chitauri Prime. Since Thanos had no interest in saving his minions, and because regular Chitauri possess no will of their own, they didn't defend themselves to the Warbringer's slaughter.[30] The Champions saw themselves forced to fight the Warbringer's army to save lives until Nova knocked out the villain. In the aftermath of the battle, Ironheart tried to confront Thanos, but was swiftly subdued and had her armor destroyed, leaving her traumatized. When the team took Warbringer to the Nova Corps, Commander Scott Adsit confiscated his helmet since he was not an officially-recognized Nova.[31] Losing the source of his powers, Sam saw himself forced to step out of the front lines and become depressed. While still reeling from Thanos' attack, Riri designed her Mk 3 Armor. During this period, Amadeus underwent his own major change, having become partially depowered and renaming himself "Brawn."[32]

While helping a Tanzanian village suffering of water poisoning, the Champions discovered the Man-Thing inhabiting their swamp. Affected by Viv's bottled-up fear from her recent traumas, the creature instinctively opened the Nexus of All Realities, sending Sam and the Wasp to the otherworldly Weirdworld.[33] The two were later tracked down by the Master of the World, who had been keeping an eye on the Champions. He found Sam and Wasp amnesiac and mutated by Weirdworld's magic.[34] Eshu took them under his wing and used Sam's ability to harness power from energy crystals to become a conqueror.[35]

The rest of the Champions ventured into Weirdworld to find their teammates using the Siege Parallel, a magical amulet granted to Snowguard by Sila for this mission. They were scattered over the magical realm, having their appearance, identities and past history rewritten in the process. Ms. Marvel became the sorceress Mystic Marvel, Spider-Man became the stealthy rogue Shadow-Spider, Brawn became the barbaric orc Brawnhammer, Viv became the crystal-powered golem Vivid Vessel, Snowguard became the rebel freedom fighter Snowgore, and Ironheart became the virtuous paladin Lady Ironheart. Only Riri remembered her previous life,[36] and managed to reunite with her teammates. The Champions confronted Eshu, the now self-proclaimed Master of Weirdworld, and stopped him from stealing a trove of crystals from the New Crystalium which would have enabled him to exert his will on Weirdworld. During the fight, Ironheart and Viv combined their wills to harness the power of the crystals to return themselves and their teammates to normalcy. Afterwards, Riri managed to snap Sam out of Eshu's influence, and he relinquished his power. Eshu escaped during the confusion, and the Man-Thing returned the Champions home.[35]

Champions started operating globally after giving full membership to Falcon, Patriot, Locust, Bombshell, Pinpoint and Power Man.[37] When the Champions were fighting Zzzax, Ms. Marvel and Viv Vision were killed in the process. Mephisto arrived and offered to rewind back time in to save their teammates. Miles accepted Mephisto's offer, and the demon reversed time resurrecting their dead teammates but unwittingly allowing a girl he saved previously die. This led to Spider-Man quitting the team.[38]

Viv Vision led Brawn, Snowguard and Falcon to deal with an anti-mutant riot in Manhattan, where Dust was already present. Sam Alexander was piloting the hovering Champions Mobile Bunker which seems to have been hit by something. This seems to have dispelled the rioters. They were attacked by Kaldera with whom Sam left the team to find his helmet as Kaldera desired true fight with him as Nova and Sam can retrieve his helmet.[3] While Brawn and the Wasp started working simultaneously with Agents of Atlas[39] and G.I.R.L.[40] respectively.

During the War of the Realms, the Champions fought with Rock Trolls in Australia. Meanwhile, Power Man and Pinpoint meet Cyclops while transporting supplies for X-Men, who hadn't expected them. Cyclops was surprised to learn that they were Champions and took charge in leading the Champions against the Rock Trolls. Cyclops revealed to Ms. Marvel that his younger self's memories were merged with his own and gave her the inspiration to take control of the team. Ms. Marvel asked Dust, who had allied herself with the Champions to join them after Cyclops vouched for her.[41]

Cyclops went back to Queens while the Champions went to São Paulo to defend it from Dísir, who have taken control over South America. Champions started fighting them, Dísir's leader Brün attacked Ms. Marvel but Power Man sacrifice himself but he instead he draw chi from dísir and Champions managed to defeat them.[42] Meanwhile, Sam and Kaldera found Commander Scott Adsit and learned the helmet had been stolen by the Thieves Guild of New York and returned to Earth. Sam managed to find helmet and rejoined Champions as Nova before imprisoning Kaldera to Nova Corps. [43]

Being held by Mephisto, Blackheart became privy to his father's latest scheme and begun corrupting members of the Champions, starting with Ironheart, who had been pushing away Viv due to the synthezoid apparently having feelings for her.[31][44] Spider-Man rejoined the team to help his friends. He, along with Ms. Marvel, also revealed their identities to Nova in order to free him from Blackheart's corruption. Blackheart, tried to use the deal that Miles made with Mephisto but Riri snapped out of his control due to Viv's affection and attacked him. Miles and Amadeus also let go of their guilt from Mephisto's deal. The Champions freed their teammates, united to defeat Blackheart, who was taken down by his father since he ruined his plans.[45]

Like this? Let us know!
Retrieved from "https://marvel.fandom.com/wiki/Champions_(Earth-616)?oldid=6451956"
Community content is available under CC-BY-SA unless otherwise noted.