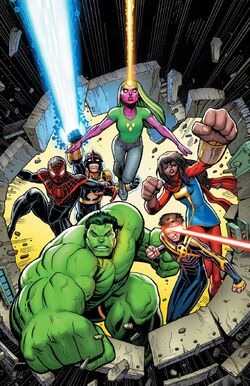 We see it all around us more and more every day -- people with power punching down. Taking lives when they don't have to. Meeting unarmed perps, even unarmed kids, with lethal firepower. That's the world we're inheriting, where violence does all the talking. But we can be better than that. We have to start enforcing justice without unjust force.

What happened here today was sickening. And stuff as bad -- worse -- happens every day in this world. The strong abuse the weak -- who have to worry more all the time about who they can trust and who they can't. You want that to change? Us, too. We're in a war for a better tomorrow. Join us. Help us to not take the easy road, and I promise we'll fight every fight they can throw at us. Help us win the hard way -- the right way -- not with hate, not with retribution, but with wisdom and hope. Help us become champions.

The Champions originated following the departure of Ms. Marvel, Spider-Man and Nova from the Avengers, when the trio had become disillusioned by the behavior of their elders, specially in regards to the second superhuman Civil War. The young heroes desired to rectify the state of distrust by the people towards superheroes in general, and soon recruited other teenagers with similar ideals, the new Hulk, and Viv, daughter of the Vision.

Their first joint mission consisted of saving a group of girls being trafficked by Pagliacci in nearby Maryland. Having succeeded and caught the attention of the bystanders, the young heroes revealed themselves to the public, with Ms. Marvel proclaiming their team's objective of fostering a better tomorrow through hope and wisdom rather than unjust force. Her speech from Baltimore became viral on the internet, and the team were soon dubbed the "Champions" in social media.[1] One of the people encouraged by Ms. Marvel's words was the younger Cyclops, who was admitted into the Champions' ranks after requesting to join them.[2]

They next traveled to Lasibad, Sharzhad where they secretly helped a group of young women, led by Amal, rout a faction of militant fundamentalists seeking to oppress them; however, the Champions' Crate was shot out of the sky when they attempted to leave.[3]

Retrieved from "https://marvel.fandom.com/wiki/Champions_(Earth-616)?oldid=3828002"
Community content is available under CC-BY-SA unless otherwise noted.