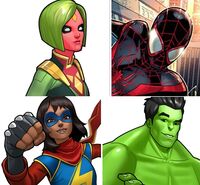 After a failed mission to Counter-Earth where Viv recruited a group of random Avengers Academy students to help liberate a group of androids asking for her help, Viv decided to be less rash and form her own team in a more organized way.

Viv and her friend Ms. Marvel were the team founders. Ms. Marvel recruited Spider-Man, and then went on a trip to invite the other members they had in mind for the team. The recruits they wanted were Amadeus Cho who was occupied fighting monsters when they were looking for him, a hero that was currently in outer space, and the last member they were trying to recruit was nowhere to be found.

Amadeus Cho would later become a member of the Avengers Academy, and was recruited to the team. The team assembled to help Cho and his friend Hercules fight against the Chaos King. [1]

Retrieved from "https://marvel.fandom.com/wiki/Champions_(Earth-TRN562)?oldid=5235199"
Community content is available under CC-BY-SA unless otherwise noted.