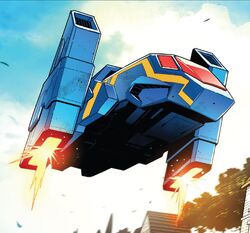 The Champions Mobile Bunker (or C.M.B.) was designed to help expand the Champions' reach across the globe. It was designed by Amadeus Cho, Nadia Van Dyne, and Riri Williams with help on technical specifications and building supplies from the Vision. The C.M.B. was finished after three weeks of work, and unveiled by the Champions to their teammates, Spider-Man and Nova, since they had been busy and didn't even know of its construction.[1]

After Underage Superhuman Welfare Act had been passed that outlawed superhero activity involving those below twenty-one years of age. C.M.B. was confiscated by C.R.A.D.L.E., leaving Champions without headquarters.[2] Later, Champions again gained possession of C.M.B.[3]

The Champions Mobile Bunker serves as a transport, clubhouse, and rescue vehicle for the Champions. It includes individual rooms for every core member of the Champions, except Spider-Man and Nova, who share a room, and a restroom. The C.M.B. features the "Champions Command Center," where activities from all over the world can be monitored through newsfeeds and satellite readings.[1]

Like this? Let us know!
Retrieved from "https://marvel.fandom.com/wiki/Champions_Mobile_Bunker?oldid=6434594"
Community content is available under CC-BY-SA unless otherwise noted.