View source
watch 01:25
Jurassic World: Dominion Dominates Fandom Wikis - The Loop
Do you like this video?
Play Sound
Part of the Outlawed event

Someone sold us out.

As Miles Morales heads to Brooklyn Visions Academy he sees all the other teens reading about and discussing something on their phones. He's greeted by his friend Ganke Lee and Jamilah, who tells them that the Champions are about to make an official statement. A teacher tells another student off for wearing a hoodie with the Champions' C-logo.

Miles and Ganke slip into a room where a student is using her phone to display the Champs broadcast on a big screen. The message is from Ms. Marvel who sums up the situation but says the Champions will continue to fight the good fight - to stand up for the underdogs and for the environment, doing stuff that the adult heroes are too busy fighting each other to bother with, even if they makes their generation the "Outlaw Generation." Ganke asks Miles about the announcement, but Miles said that she didn't consult the rest of the team on this.

Jamilah bursts in and denounces the announcement, calling the Champions liars. She saw what they did to the Coles Academic High School when Viv Vision exploded. She tells the class that she's starting a local chapter of the C.R.A.D.L.E. Junior League, which leads to a fight between her and a classmate that Miles tries to break up.

That evening, Miles as Spider-Man is patrolling when he sees a purse-snatching in progress. He webs up the culprit and returns the purse to the owner, who is revealed to be an officer for the NYPD who tries to arrest Miles. As more police arrive, Miles makes his escape, but not before hearing them complaining that if they don't arrest enough teen vigilantes, then C.R.A.D.L.E. will take over, which makes Miles contemplate quitting being a superhero.

Later, he arrives at an abandoned warehouse in Brooklyn that is acting as a cover for a secret meeting. The entrance is guarded by N.A.T.A.L.I.E., who says hey to Miles while commenting that Riri let her be there for the meeting to act as security. Once Miles enters the meetings, he sees his fellow Champions teammates, Cloud 9, Moon Girl, Squirrel Girl, Starling, and Energizer (Katie Power) and Mass Master from the Power Pack.

Once they all settle in, the meeting begins via a projection drone that allows Ms. Marvel to join them remotely. She says she wanted to call the meeting to help unite the younger heroes, which makes Moon Girl complain about Ms. Marvel issuing her communiqué without consulting them beforehand. Pinpoint also points out that they have no base since C.R.A.D.L.E. impounded the Champions Mobile Bunker. Starling blames Viv for the Coles incident, while Dust blames Ms. Marvel for allowing Viv to do what she wanted to do. As Patriot asks how they're supposed to fund their activities, Cloud 9 reminds them they can each still be heroes if they find an approved mentor. Bombshell agrees, stating that the younger Falcon) has already signed up with Sam Wilson.

Suddenly, Starling takes over the meeting, stating the mentor program won't work for most of them. Ms. Marvel is right, they should ignore the law, but also that the Champions are a lost cause. Nova cronfronts Starling, but Miles intervenes before a fight breaks out. Kamala tries to regain control by saying that adults don't know what's best for teens, but Spider-Man disagrees with her. He's seen that lots of youngsters don't trust the Champions either, and they have to deal with that as well.

Without warning, C.R.A.D.L.E. troops break in and break up the meeting to arrest them all. Starling fights back but Justice of C.R.A.D.L.E. freezes her in midair with his telekinesis. He tells them he's here to stop them making a mistake like he did. Spider-Man tells Pinpoint to teleport them all out, but the latter freezes because his portal was a partial cause of the explosion that 'killed' Viv. N.A.T.A.L.I.E. manages to inform Spider-Man about a vulnerable crack in a wall, and tells him there's a subway access tunnel on the other side. He gets Bombshell to blast a big hole and they start herding teens through it. Nova tells Ms. Marvel to end her transmission, which she does while noting that that someone must have sold the team out.

As Bombshell, Nova, Spider-Man and the Wasp hold off the troops while everyone else escapes, C.R.A.D.L.E. manages to grab Bombshell and trap Wasp in a jar as the uncaptured heroes make their escape.

Outside the troops comment that they were alerted to the meeting by an untraceable message whose syntax indicated the source was a synthezoid. As they assume it was Vision who informed them, it was revealed to be a much alive Viv Vision.

THE CHAMPIONS RETURN IN TROUBLED TIMES!

• A law is passed that goes against everything Ms. Marvel, Nova and Spider–Man founded the Champions for…But the world still needs heroes, even if the world doesn’t want them right now.

• After Ms. Marvel makes an unexpected and emotional announcement that her team won’t go down without a fight, a group of teen vigilantes gathers to plan their next move. But the C.R.A.D.L.E. task force is hot on their trail, and there’s a spy in their midst…

• Eve L. Ewing (IRONHEART, OUTLAWED) and Simone Di Meo (IMMORTAL HULK: THE BEST DEFENSE and VENOM: ACTS OF EVIL) team up for a dramatic new era of Champions that will define Marvel’s teen heroes for years to come! 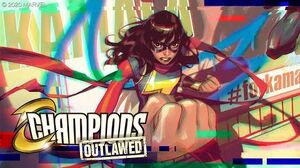 Like this? Let us know!
Español Русский Türkçe
Community content is available under CC-BY-SA unless otherwise noted.
Advertisement