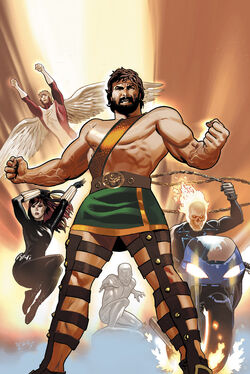 Holy crap, it's Hercules, Iceman, Black Widow, Ghost Rider, and Angel! But why? It makes no sense!

The Champions were the first West Coast-based superhuman team. They formed much as did the Avengers, with several heroes meeting by chance against a great threat, in their case the Greek god of death, Pluto[1]. The group consisted of two former X-Men (Angel and Iceman), Greek god of strength Hercules, supernatural avenger Ghost Rider (Johnny Blaze), and the Russian spy called Black Widow, who acted as team leader.[2]

After defeating Pluto, the self-styled "Champions of Los Angeles" decided to stick together as a team[3]. Their public dedication ceremony turned into disaster when they were attacked by Griffin, Titanium Man and Crimson Dynamo[4]. Angel's wealth bankrolled the group, and they bought a surplus Avengers Quinjet, the "Champjet", for team usage. Black Widow and Hercules made an abortive attempt at romance, but though it did not last long, neither did it seriously impair their working relationship. The group also worked from time to time with Black Goliath, who provided scientific expertise in addition to his brawn.[5]

During their brief tenure as a team, the Champions once fought The Incredible Hulk, who was, unknown to them, trying to get his injured cousin Jennifer to a hospital for the blood transfusion that would inadvertently turn her into She-Hulk.[6]

In addition to Black Widow, another Russian heroine joined the team: Darkstar joined after participating in an attempt to capture the Black Widow.[7]

The Champions briefly reunited, teaming up with X-Force to battle their old foe Pluto[8]

After their dissolution, the Champions became a sometime object of ridicule, with Iceman recalling the team as an embarrassment[9], and Angel calling the team "a nightmare - we just didn't know what we were doing."[10]

Despite this, two recent teams courted the name as their own: the California branch of the 50-State Initiative was originally to be named "The Champions", but this was quickly changed to "The Order."[11][12] Also, the team first known as the Great Lakes Avengers (also the Lightning Rods and Great Lakes X-Men) changed their name to the unused "Great Lakes Champions" during a poker tournament held by The Thing,[13] although they later switched back.

Retrieved from "https://marvel.fandom.com/wiki/Champions_of_Los_Angeles_(Earth-616)?oldid=5545646"
Community content is available under CC-BY-SA unless otherwise noted.