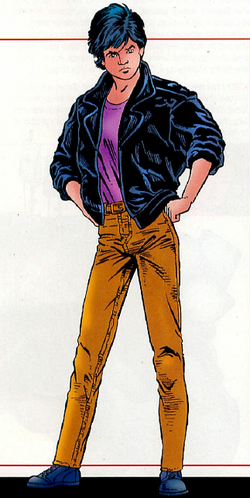 Chance and her parents were members of the Glorification Church, a South Korean political organization masquerading as a church. Its leader, Reverend Yune Kim Park, brought Chance's family to the United States and promised them citizenship. Instead, he enslaved them along with the rest of his followers, forcing them into menial jobs and to give their earnings to the "Church."[2]

Chance somehow escaped, and living on the streets, fought or hassled the Glorification Church and its brainwashed adherents at any opportunity. She has since felt a burning hatred towards Yune Kim Park.[3]

To survive on the streets, Chance adopted the appearance and manners of a tough boy - even today, she denies being a female and is very perturbed if made to look like one. She survived stress and depression because her life was improving.[3]

She was completely unaware of her own power - which is useless to herself; she needs to be with other super-humans to use it.[4]

At some point, she was contacted by the alien Ariel, who formed the group known as the Fallen Angels out of disenfranchised young mutants.[5]

Originally, Chance was unaware of her mutant power until Ariel betrayed the Fallen Angels to her mutant-hunting race. The Fallen Angels escaped, however, and presumably continue to eke out a living on the streets. It remains unknown if she retains her powers after M-Day.[4]

Chance currently has no specific control over her power, and it may start and stop at any given time, either to enhance or negate any superpower in her immediate area.

Could not control her powers.

Like this? Let us know!
Retrieved from "https://marvel.fandom.com/wiki/Chance_(Fallen_Angels)_(Earth-616)?oldid=5764515"
Community content is available under CC-BY-SA unless otherwise noted.