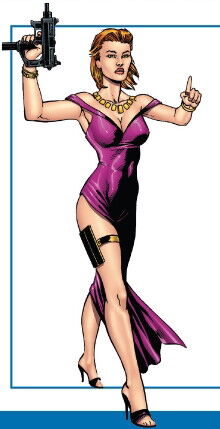 Charlemagne was, at one time, a freelance intelligence agent. She had taken a job for the KGB. It was a mission that Logan had protested, but Charlie insisted and her handler double-crossed her. Charlie called for Logan's help and he understood that it was serious.[1]

After fifty Soviet operatives couldn't take them down, they sent in KGB agents that had been undercover for years and Wolverine's berserker rage finished them all. After the slaughter, all that was left was a little heart shaped pendant. After many years, Charlie did too many jobs and knew too much and was marked for death by multiple agencies. She began killing ex-KGB agents, simply for revenge, and after Wolverine showed-up, decided to lay-low. Logan tracked her to a steel mill just outside of East Berlin and the two stayed together for a while.[1]

When the couple went to dinner at The Ganymede on Friedrich Strasse, Spider-Man arrived to inform them that everyone in the restaurant was an agent wanting to kill Charlie, a fact that she and Wolverine already knew, and a gunfight broke-out. After loosing Charlie in the fight, Wolverine and Spider-Man attempted to track her down, by getting to her marks before she did, but were always one step behind.[1]

After the pair split, Charlie called Wolverine to a Soviet cemetery at Teptow and he understood that she wanted him to end her life, so that the Soviets wouldn't have the chance to torture her. After flinching, Wolverine pulled too much and Charlie was bleeding to death. At that time, Spider-Man arrived and attempted to stop Logan from killing her.[1]

A brutal fight broke-out between the two, until Wolverine stated that the only way that Spider-Man could stop him would be to kill him and killing was second nature to him. At that time, a government chopper arrived and the two split. In the confusion, Charlie sneaked-up on Spider-Man, aware that he was tense; believing it was Wolverine and exhausted both physically and mentally, he gave a punch of super strength, accidentally killing her. Thus, Charlie effectively committed suicide by Spider-Man's hand to avoid falling into the hands of her enemies.[1]

Declining health: According to Logan, Charlemagne was in declining health when they met up in Berlin,[1] thus she set up her own death.[2]

Heart charm: Charlemagne's calling card left at the scene of her murders,[2] Spider-Man kept one as a momento.

Like this? Let us know!
Retrieved from "https://marvel.fandom.com/wiki/Charlemagne_(Agent)_(Earth-616)?oldid=5761618"
Community content is available under CC-BY-SA unless otherwise noted.