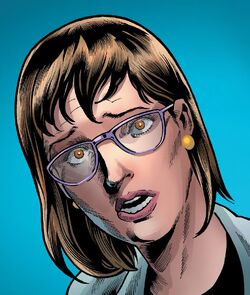 The hard part... well, that's what it always is: looking at ourselves in the mirror.

Dr. Charlene McGowan was a scientist that formerly worked for CalTech but was fired for drug use, justified by her later as self-medicating due to the stress of her gender transition. She later began working for a MGH lab owned by the Kingpin, to whom she proposed the lab be repurposed for black-market hormone production, helping the transgender community while still making a tidy profit due to the difficulty of acquiring them legally. Fisk and her superiors were interested, but Daredevil subsequently attacked the lab, leading to her arrest. That was when she was approached by General Reginald Fortean to join the U.S. Hulk Operations, a secretive government organization set up to capture or kill the Hulk and other gamma mutates, in exchange for clemency. She agreed[2] and oversaw experiments conducted on Del Frye when he was brought to Shadow Base for examination.[1]

Following the gruesome demise of her colleague Dr. Clive,[3] McGowan became Shadow Base's head of research and was subsequently involved in the creation of Subject B, a creature made from the corpse of Rick Jones and genetic material from the remains of the Abomination.[4]

During the battle between the U.S. Hulk Operations against the combined forces of Gamma Flight and the Hulk and his allies, McGowan was confronted by Rick Jones over her actions done not only to him but to Del Frye as well. McGowan revealed that she felt guilty over what she had done and that she was actually trying to relieve Fry of his suffering. This convinced Jones to spare her life.[5] When Fortean began losing control due to the gamma-grafted tissue, McGowan decided to relieve him of his command and ordered everyone to stand down. Fortean was later killed by the Hulk, who decided to take command of the Hulk Operations and believed that McGowan was someone he could work with.[2]

She aided Hulk as a scientist for the Hulk Operations, including operating the Shadow Base's translocator to teleport Hulk to different locations where he was needed and retrieving Hulk, even when he didn't order it. When Hulk's feud with the corporation Roxxon forced its CEO The Minotaur to hire the alien Xemnu to use his psychic powers to brainwash the public into hating Hulk and even make Banner go insane, Charlene was able to resist Xemnu's brainwashing and alert Doc Samson to Xemnu's scheme.[6]

After Hulk defeated Xemnu[7] and became popular, McGowan and Samson monitored a PR event Hulk and Rick Jones attended. When the Leader, who was in control of Rick, caused Hulk to unleash a burst of gamma energy that devastated the area, Charlene tried to teleport Hulk and Jones back to Shadow Base, but the leftover gamma energy interfered prevented that. As Samson went to retrieve a flash drive that had data that would allow Charlene to teleport Hulk and Samson, the Leader took control of Del Frye and used him to kill Samson and a Hulk Operations scientist. After Absorbing Man absorbed the leftover gamma energy while fighting Hulk, she was able to teleport Rick back to Shadow Base.[8]

Charlene was shocked by the deformed appearance Rick received after being hit by the gamma energy Hulk unleashed. The Leader then revealed his control over Rick and Del Frye and tried to entice Charlene into joining his side. Charlene refused and ordered everyone in Shadow Base to evacuate. She also seemingly killed Rick after using the translocator to split him in two.[9]

Due to the Leader's attack, Shadow Base Site G was abandoned, and everyone working for Hulk Operations went underground except for McGowan. She fled to a cabin in Arizona where she set up as a safehouse.[10] McGowan later visited the apartment of Jackie McGee who revealed to her that she had been mutated by the gamma energy released by Hulk in Georgeville.[11] After detecting gamma energy at Shadow Base Site B, McGowan and Jackie teleported there and discovered that the energy signature were being given off by Rick Jones and Del Frye who had been fused together. Puck, Shaman, and Doc Samson in the body of Sasquatch were also there and tried to convince McGowan that Rick and Frye weren't a threat anymore.[12]

Unlike General Fortean and fellow scientist Dr. Clive, Charlene has shown a little bit more sympathy for her subjects. She asked for approval to adjust the mixture in Del Frye's holding tank to lessen his pain,[1] and she apologized to Rick Jones for what she turned him into.[13] According to her, the hardest part of her job is looking at herself in the mirror.[14] She also demonstrated concern for Fortean's wellbeing when he translocated through space to the Alpha Flight space station, and when he bonded with the Gamma-Activated Tissue.[15] When the Leader tried to convince her to side with him, she vehemently refused, not wanting to carry out inhumane experiments again.[9]

Like this? Let us know!
Retrieved from "https://marvel.fandom.com/wiki/Charlene_McGowan_(Earth-616)?oldid=6478547"
Community content is available under CC-BY-SA unless otherwise noted.