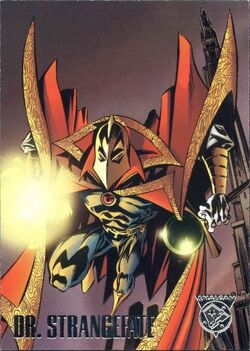 If Access is not eliminated, everything I've accomplished, all I've built could come crushing down.

While traveling through the Himalayas, meta-mutant Charles Xavier was rescued by Nabu the Ancient One, who was Lord Supreme of Order of the Amalgam Universe at the time. Taught the mysteries of the supernatural world at the feet of the Nabu, Xavier tapped the energies of forces both telepathic and mystical, making the dour sorcerer one of the most powerful beings in the Amalgam Universe. Already a powerful meta-mutant telepath, Xavier soon surpassed his teacher and took over as Lord Supreme of Order. Though one of the founding members of the Judgment League Avengers, Dr. Strangefate moved on to more solitary pursuits in shadowy realms, leaving common protection to lesser mortals.

While a self-proclaimed protector of the universe, Doctor Strangefate was not a typical hero. He preferred to stay within his sanctum in the Tower of Strangefate and orchestrate events from a distance. He achieved his goals through manipulation of others.[1] Super-villain Big Question got elected mayor of New Gotham City. Rumor had it that the new mayor was a mere puppet and Strangefate was his puppet-master.[2]

Doctor Strangefate became aware that the Amalgam Universe was preceded by two older universes and that a man called Access had the key to restoring them. Knowing that this would terminate the Amalgam Universe, Strangefate decided to capture and eliminate Access.[1] Strangefate had several superhuman agents to whom he assigned missions. For this mission he chose his three most reliable agents: Skulk, Jade Nova, and the White Witch.[1]

Strangefate gave the trio the basic facts of this mission. He summoned a magical image of Access, introducing him as the trio's target. He explained that the man was called Access and that he was an outsider and a wild card. His current location was New Gotham City. The full extent and nature of Access' powers was uncertain, but he wielded might on a universal scale. Strangefate proclaimed that Access was more dangerous than any of their previous foes, including Mephisatanus and Baron Wotan.[1]

The White Witch eventually returned with an unconscious Access. She asked for a reward, but Strangefate offered her none. He asked her to revive Access, so she did. Strangefate then asked Myx to escort her out. Strangefate trapped Access in mystic bonds and attempted to erase the shards of the two previous universes held within him.[1]

He soon stopped, shocked. The shards were not within Access at all and he did not know where else they could be. He was not prepared for this and did not know what to do. The mystic bonds no longer held Access, who managed to escape through the closest window. Back in the sanctum, Strangefate was left contemplating his failure. He had vowed to protect this universe and serve as its protector. He knew he had failed on both counts. His goals were to create a better world, but these plans were gone. He dropped his mask, leaved his sanctum and proclaimed: "it's over".[1]

Big Question had troubles with his public image as a pawn of Doctor Strangefate. In an attempt to improve his reputation, he created a plot that would make them appear as enemies. He covertly hired assassins Dare the Terminator and Catsai to attempt to assassinate the mayor. He then spread rumors that they were working for Strangefate. He intended to kill the two women personally, solidifying his reputation as an independent agent and a master fighter. If he failed and died instead, the death would still be blamed on Strangefate.[2]

Following the restoration of the DC and Marvel Universe, the Amalgam Universe seemingly ceased to exist, but Doctor Strangefate somehow managed to survive. His consciousness became part of Doctor Strange's subconscious. From there he was able to manipulate events, shifting people from one universe to the other. His goal was to pave the way for the restoration of the Amalgam Universe.[3] During his presence in Doctor Strange's mind, Strangefate managed to stay undetected by other telepaths. Not even Phoenix managed to detect him, even while in the same room as Strange.[3]

During the interaction between people from the DC and Marvel Universes, the Justice League of America fought the X-Men within Stephen Strange's Mansion. Strange took no part in the battle as he felt something inside him trying to get out. He eventually fell unconscious and his body was replaced with that of Doctor Strangefate. Strangefate started to turn the Mansion into a version of his own Sanctum; it was his first step in trying to restore his universe.[3]

Most of the members of the Justice League and the X-Men were too confused to react to him, but Storm and Wonder Woman decided to team-up and attack Strangefate. Far from being intimidated by his two inferior opponents, Strangefate welcomed their approach. He used his powers to merge the two into a version of Amazon, his world's amalgam of them; only this version was not an independent heroine but a subservient agent of Strangefate.[3]

Strangefate immediately sent his new agents to capture Access. Access teleported again, using his powers to locate the place where Strangefate had banished Doctor Strange. He found the astral form of Strange trapped in an unnamed dimension. Strange explained that Strangefate had left him disembodied and phasing constantly between a myriad dimensions; this way he had no way to form an escape plan and Strangefate avoided having to kill a component of himself.[3]

Access released the astral form of Strange and teleported it back to the Mansion. Strangefate confronted Strange in a mystic battle. He was confident as the battle started, declaring himself to be twice the mystic Strange is. He also stated that his reasons were noble, he wanted to restore an entire universe. Strange argued that his opponent's intentions were criminal, since he intended to sacrifice two universes to reach his ends.[3]

The battle ended as Strange merged his astral form with Strangefate's body. Defeated, Strangefate pleaded that he only wanted to live. He begged Strange to spare himself and his universe. Strange listened to him and recreated the Amalgam Universe and its residents, placing Strangefate among them. However, this entire universe was contained within a vessel to prevent it from ever threatening other universes. Strange offered the vessel to Access for safekeeping.[3] With Strangefate gone, his creations dissolved and the Justice League and the X-Men returned to normal.[3]

A mysterious villain started destroying the Amalgam Universe's Earth, the destruction wave going city by city. Lobo the Duck awoke in the ruins of Manhattan. He found himself the last survivor among those who attempted to rescue the city. He found remains of dead heroes, among them the Mask of Doctor Strangefate.[4] The villain responsible for the death of the heroes was revealed to be the Gold Kidney-Lady.[4]

Doctor Fate: By simply being an incarnation of Dr. Fate, Charles automatically has superhuman strength, telekinesis, flight, and superhuman durability.

Sorcery: By casting spells, Doctor Strangefate has these abilities:

Strangefate possesses several mystical artifacts, such as the Cloak of Levitation and the All-Seeing Eye, which further enhance his mystical powers; most important being the Helmet of Strangefate.

Like this? Let us know!
Retrieved from "https://marvel.fandom.com/wiki/Charles_Xavier_(Earth-9602)?oldid=6003613"
Community content is available under CC-BY-SA unless otherwise noted.