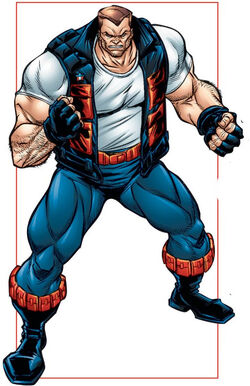 Surrender? Not bleedin' likely! Get ready, Guardians, we've got us some hostages to free...and a world to save!

Charlie-27 was a soldier and space militia pilot, genetically engineered to live in Jupiter's gravity, born in Galileo City, Jupiter. As such, he had eleven times the muscle mass of a normal human. He was also a Captain in the United Lands of Earth Space Militia.

In 3007 A.D., the alien Badoon invaded the solar system, performing various acts of genocide. Charlie was the only survivor of his world due to being on a long-term space mission. He joined forces with Martinex, Yondu, and Vance Astro to form the Guardians of the Galaxy, a band of freedom fighters.[2] In 3014 A.D., he teamed with the time-traveling Thing, Captain America, and Sharon Carter to retake New York City from Badoon forces.[3] He later time-traveled to the 20th Century, and met the Defenders.[4] He returned to 3015 A.D. with Starhawk and the Defenders to defeat a Badoon invasion force.[5]

After the final defeat of the Badoon, Charlie-27 found himself unable to fit in with postwar civilian life. He departed Earth on a space mission with his fellow teammates[6] and met Nikki, who joined the Guardians of the Galaxy.[7] He then visited the Asylum planet.[8] Charlie helped defeat the Topographical Man[9] and was present when the Guardians learned how the Silver Surfer repulsed the original Badoon invasion attempt of Earth in the 20th Century.[10] He met Aleta and learned the origin of Starhawk[11]. He battled the Reavers of Arcturus.[12] Charlie then discovered the space station Drydock, which the Guardians used as a base of operations for a time.[13]

Charlie later teamed with the time-traveling Thor to battle Korvac and his Minions.[14] With the Guardians of the Galaxy, Charlie-27 traveled to the present, in pursuit of Korvac.[15] He met the Avengers, and saved the life of a young Vance Astrovik.[16] Charlie assisted the Avengers in battling Korvac.[17] He attended an Avengers membership meeting, but wound up parting company with the Avengers.[18] Charlie attempted to prevent the meeting of Vance Astro's 20th and 31st Century selves, and battled the Thing to do so.[19] With the Guardians, he then returned to the 31st Century.

Return to the 31st Century

Charlie once had a romantic relationship with fellow Guardian Nikki, but the two broke it off. They still remained friends.[citation needed]

Though from the future, Charlie-27 managed to become involved in the Infinity War.[26] He and his team saved Avengers Mansion from an invasion by the Masters of Evil.[27] Then both teams saved each other from waves of evil doubles based on their teams.[28]

Rita DeMara once earned his friendship by performing an impromptu surgery with her stings on a massive internal blood-clot, saving his life.[29]

As with the rest of the team, Charlie's last appearance was on a mysterious planet as the team had become lost in space and time.[30]

Due to his Jovian ancestry, Charlie-27 is 11 times stronger and 11 times denser than a normal human being:

Charlie is a brilliant military man, and a combat specialist. He's well versed in using his strength to his advantage in combat, including using grapples and using starship cannons as hand held ranged weapons. He's an exceptional field commander and has a knack for seeing through his enemies strategies.

At first his strength was in the 2-5 ton range. Later it ranged between 5-10 tons.

Charlie a very militaristic man, and this has been used against him in the past. In the trial of Mainframe, he failed because he fell into Military dogma rather than coping with the situation at hand. During the Guardian's failed invasion of the Badoon, his military sense of honor made him fight nearly to death against the Captain Universe force.

Charlie generally has his Guardian's Communication/Teleportation star on him at all times.

He also goes almost nowhere without a ranged weapon, and he is never without Yondu's Yaka Dagger which was given to him as a gift. Varies with the situation.

See Guardians of the Galaxy (Earth-691)

Like this? Let us know!
Retrieved from "https://marvel.fandom.com/wiki/Charlie-27_(Earth-691)?oldid=5756293"
Community content is available under CC-BY-SA unless otherwise noted.