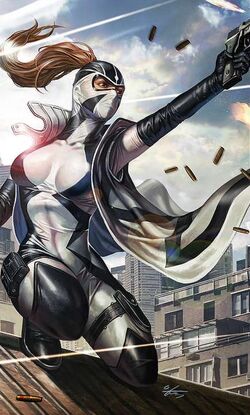 As X-Force come face to face with the new Brotherhood of Evil Mutants, Fantomex was poisoned by Mystique, completely blocking his powers. Psylocke was mind controlled by Shadow King forcing Fantomex to intervene. He removed his mask which contained his mind shields and gave it to Psylocke, breaking Shadow King's control over her. This however left him vulnerable and after just managing to send Psylocke away with E.V.A. he was killed by the Brotherhood.[2]

E.V.A. and the rest of X-Force managed to recover his body and E.V.A. deposited it in a cloning sample hatch in the White Sky Facility, the Cloud. All three of his brains were intact, and the machine mistakenly cloned a new body for each brain. One of them being a female version of Fantomex, the self-proclaimed "nicest" of Fantomex's brains.[1]

Six months later, Psylocke and Fantomex seemingly broke up. In Europe, Cluster and Fantomex were stealing together, in Paris and Budapest. They were shown to kiss hinting that they started a relationship. Suffering from a blank of the presence of Betsy, they thought Dark Fantomex, the third clone, was possibly tracking her also. They then leave Europe to find her before him, unbeknown to them that the third Fantomex was following them, for him to find Psylocke.

Similar to those of Fantomex.

Lady Fantomex is a skilled marksman and a formidable hand-to-hand combatant. She can also read the body language of others with unparalleled precision. This, coupled with her superhuman abilities, makes her a master of misdirection. Lady Fantomex is also able to place herself in a state of light auto-hypnosis to perform critical tasks, such as self surgery.[3] All this, of course, assuming she retains the abilities of the united Fantomex.

Lady Fantomex's ceramic armor has goggles (presumably for night vision) and provides some protection. There may be other devices in it. Her mask incorporates telepathy-blocking ceramics.

Like this? Let us know!
Retrieved from "https://marvel.fandom.com/wiki/Charlie_Cluster-7_(Cluster)_(Earth-616)?oldid=5628229"
Community content is available under CC-BY-SA unless otherwise noted.