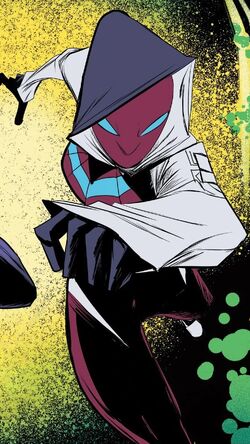 Charlotte Morales-Stacy was the daughter of Miles Morales and Gwen Stacy. Being celebrities themselves, their parents took great effort to keep their children away from attention and personal scrutiny of their lives.[1]

Along with her brother Max, Charlotte first became an adventurer of her own while battling an interdimensional talk show host Mojo Harvey. Afterwards, they joined the Amazing Eight under the aliases of Spider-Girl and Spider-Boy. The kids frequently encountered alternate versions of their mother Gwen Stacy and were considered a dangerous threat to their timeline by the Watchers.[1]

While their parents were away for their second honeymoon, the HQ of the Amazing Eight was visited by a displaced younger version of their mother from Earth-65, who had been accidentally teleported to Earth-8. After meeting her potential offspring and their adult in charge, Spider-Ham, Gwen was offered access to a portal back to her universe. Gwen asked Spider-Ham for help in defeating S.I.L.K. back hat her home, but he initially refused. Charlotte convinced him to help out, pointing out that based on the recounts of her parents' adventures, they had to lend a hand.

The rest of the Amazing Eight, minus Miles and Gwen, joined the trip to Earth-65, during which Spider-Girl and Spider-Boy confronted and helped defeat this universe's Scorpion, who was an evil counterpart of their grandfather.[2]

Charlotte possesses powers and abilities similar to her parents, including wall-crawling and superhuman speed, agility, equilibrium, and reflexes, as well as a spider-sense.[1]

Charlotte takes after her maternal grandfather and is a skilled detective.[1]

Charlotte possesses her mother's original Web-Shooters and a personalized version of her suit.[1]

Like this? Let us know!
Retrieved from "https://marvel.fandom.com/wiki/Charlotte_Morales-Stacy_(Earth-8)?oldid=6189053"
Community content is available under CC-BY-SA unless otherwise noted.