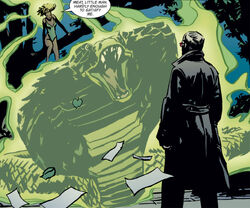 A member of Daredevil's circuit troupe, Charmer had the ability to create energy constructs in the shape of snakes. When the Skull's advancement across America brought an end to Daredevil's circus, Charmer and some of the other members of the circus were ordered by Captain America to travel ahead to New York and seek training under the tutilage of Scott Summers.[citation needed]

Attacking Summers in Central Park, they convince him to train them to be the next team of X-Men, and Charmer would fight along side her comrades against the Skull. In the years that followed the Skull's defeat, Charmer would develop a crush on Mr. S, which would remain unrequited as he still cared for the Phoenix (whom contacted him through their rapport from the Realm of the Dead and later Paradise) but she would continue to fight along side the X-Men.[citation needed]

When Captain America was killed aiding Mar-Vell in collecting items of power on Earth, the X-Men including Charmer joined up to help the reborn hero continue his quest. The quest would take Charmer to Hel Laboratories where she would meet the Ant Men, the Blue Area of the Moon to witness Mar-Vell kill the Supreme Intelligence with Thor's hammer, and help battle the Wendigo in Wakanda when Mar-Vell traveled there to collect the Cosmic Cube.[citation needed]

The X-Men would stay in Wakanda and help the nation relocate to the Savage Land in order to escape the army of Wendigo that stalked them. There, Charmer would aid her fellow X-Men, Black Panther, Storm, and the Ani-Men destroy the Wendigo army which turned out to be the mutant Multiple Man. Following this the X-Men would remain in Wakanda, and would be targeted by Belasco and the Dire Wraiths until they are saved by Mar-Vell, and Machine Man. Later, Charmer appeared at the wedding of Medusa and King Britain. Her current whereabouts are presently unknown.[citation needed]

Charmer can create energy constructs in the shape of snakes.

Like this? Let us know!
Retrieved from "https://marvel.fandom.com/wiki/Charmer_(Earth-9997)?oldid=5762181"
Community content is available under CC-BY-SA unless otherwise noted.