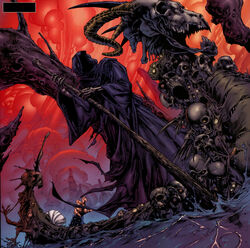 Charon was the son of Erebus and Nox, whose duty was to ferry over the River Styx the souls of the deceased who had received the rites of burial. In payment, Charon received the coin that was placed in the mouth of the corpse. Due to his lot in life, Charon was a morose and grisly old man.[2]

During the Twelve Labors of Hercules, when he was sent to capture and take Cerberus from Hades, Hercules forced Charon to take him there. After that, Pluto punished him for letting Hercules into the Underworld by keeping him in chains for a whole year.[3]

Doctor Strange and the X-Men found themselves in the Underworld to recover Nightcrawler's soul and believed that Margali Szardos wanted them to follow the same path as Dante and meet "Satan" himself. Opening the main gate of warning, they came to the shores of the River Acheron. They were greeted by Charon, who warned the other X-Men that if they follow Nightcrawler, they would share his fate: death. Unwilling to leave their friend behind, the X-Men and Dr. Strange agreed to accompany Charon across the River Acheron to a massive palace.[4]

Charon took Ka-Zar and his friends across the river on their journey to the Underworld.[5]

Charon took Ares to meet Pluto, in hopes of forming an alliance against Thor during a time when he was suffering from madness.[6]

Charon regularly took Hades through Tartarus to view all the tortured souls who were dammed there. Hades used this time to plot his next attack against the Asgardian Thor.[7]

Charon reluctantly took Hercules and a film crew to the Underworld. When one of them said in jest that he loved him on "Tales From the Crypt", Charon reacted and broke his vow of silence to curse out the man and strangle him.[8]

When Hercules Amadeus Cho came to the underworld they traveled through the new location of Erebus which is now in the form of a Casino based in Atlantic City on the Jersey Shore. After gambling they went to the River Styx, where they found the boat manned Charon which now appeared as an America River Boat casino. Charon although still in his skeletal now wore a more modern uniform. He was at first happy believing Hercules had died and was disappointed when he revealed he was just visiting. He was still angry with the hero and decided to charge him 10,000 gold pieces in exchange for a ride to the Underworld. Cho, who had just one a load of chips, payed the ferrymen, who reluctantly took them to Tartarus, knowing he would be punished for his actions.[3]

When the God of War Ares died, Pluto ordered the ferrymen to deliver him to the Elysian Fields, but when he was about to reach their destination, he would teleport him from the boat and cast him to the lowest depths of the Underworld in a endless cycle of punishment.[9]

Deadpool and Thanos traveled to the Underworld, but the arrival was far from easy as Deadpool landed on the top of Charon. Due to his skeletal-like appearance, Deadpool believed he was his beloved Mistress Death, and kissed him passionately, much to his annoyance. It wasn't until Thanos corrected him that Deadpool stopped.[1]

Like this? Let us know!
Retrieved from "https://marvel.fandom.com/wiki/Charon_(Olympian)_(Earth-616)?oldid=5248796"
Community content is available under CC-BY-SA unless otherwise noted.