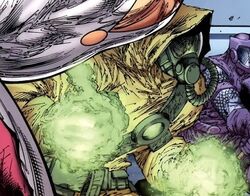 Chen Lu seemingly had a similar history as his Earth-616 counterpart. He became a criminal named Radioactive Man, but later became a member of the government sanctioned team, the Thunderbolts.

Hearing the screams, the rest of Cyberforce and the Mighty Avengers tried to enter the complex, only for the Thunderbolts to try to stop them. But during their fight, the creature attacked them all. Ellis was able to use Venom's connection to his symbiote to hurt the creature, allowing the heroes to seemingly destroy the creature.[3]

Seemingly those of the Andreas von Strucker of Earth-616.

Seemingly those of the Chen Lu of Earth-616.

Like this? Let us know!
Retrieved from "https://marvel.fandom.com/wiki/Chen_Lu_(Earth-7642)?oldid=5475604"
Community content is available under CC-BY-SA unless otherwise noted.