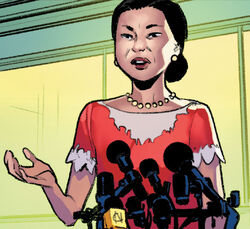 My life ended on that stage. And now I will make a new one from the ashes. I will rise like a phoenix.

The wife of Lim Zhao and figurehead of his billionaire corporate assets, Mrs. Zhao was an adamant mutant hater. Her discontent with Homo superior bloomed into anti-mutant activism once her husband became an Order of X advocate after the worldwide message broadcast by X establishing Krakoa as a nation.[1]

Rather disquieted by the turn of events, Chen incarcerated her husband within their own home, aiming to use his fabricated disappearance as a means of garnering support for her anti-mutant smear campaign; both to discredit the mutant race and further her own profits through racism and subterfuge.[2]

When she rebuked Bishop's inquiries into the whereabouts of her husband, he opted to work with Kate Pryde to find the truth on their own. While at a hate rally she was sponsoring, Chen was dismayed to find the two mutants had rescued and brought her husband to her, looking no worse for wear. After a brief scorning by Kathrine about mutants no longer being viable for scapegoating, Zhao was left publicly humiliated in front of her support group now that her scheme had been revealed.

Seeking restitution, she aligned herself with the new anti-mutant government established in Madripoor, where the inner circle of Homines Verendi inducted her into their sect as the White Bishop.[1]

Like this? Let us know!
Retrieved from "https://marvel.fandom.com/wiki/Chen_Zhao_(Earth-616)?oldid=6004532"
Community content is available under CC-BY-SA unless otherwise noted.