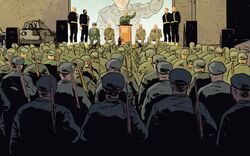 The Chernayan Army was taken over by general Armand Petrov during his ploy to carry out a coup d'état. After President Zawadski was ousted,[1] and the situation stabilized,[2] the military started claiming lands, farms, businesses and everything else, executing their owners if needed.[3] Several internment camps were also ran by the military.[4]

On his way to kill President Petrov, the Punisher confronted and slaughtered countless of soldiers loyal to their new leader.[4] During a military rally to celebrate the recognition of the new government by the international community, Petrov was confronted by the Punisher, who proceeded to kill dozens more of soldiers.[5] Following President Petrov's death, it was confirmed that much of the Chernayan Army had been killed during the Punisher's pursuit.[6]

Retrieved from "https://marvel.fandom.com/wiki/Chernayan_Army_(Earth-616)?oldid=5545667"
Community content is available under CC-BY-SA unless otherwise noted.