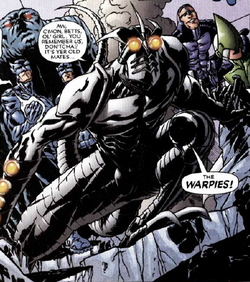 The Cherubim is a government team constituted of the mutated children Quill (the official leader), Fern (the real leader), AC-DC, Giggles, Lump and the Cherub Whirlwind

Formed in the rank of the numerous Warpies captured by the R.C.X, they were intended to be used by Michael and Matthew as a threat to persuade Brian Braddock to put the Braddock Manor and the Mastermind Computer at their service.[1]

Freed from their containment van by Meggan, they attacked the Manor but were defeated after Lump use his power to shows to Captain Britain, Captain U.K. and Elizabeth Braddock their greatest nightmares : Mad Jim Jaspers and the Fury, giving to them the strength to win.

Meggan have evolved from her monster-form, discovering new powers and killing Cherub Whirlwind.[2]

While the Warpies were eventually accepted in the Manor, the Cherubim goes rogue, scared of the consequences of their acts.

They ended at London where they destroyed a toys store and were reported to the R.C.X. by the police.[3]

Approached by the Warpies Spasm and Peeping Tom, they were recruited into the thieves gang known as the Parasites, led by "Uncle Lex".[4]

After the death of one of them, Snap, they decided to quit, but not after having be forced to battle with Uncle Lex's Warpies.[5]

They reappeared at Nigel Orpington-Smythe's service, attacking and abducting Scott Wright, the mutant known as Micromax for the R.C.X.

They also participate to the massive fight in the Cloud Nine complex against Excalibur.

The Warpies were later abducted and mutated by Black Air and then used as weapons by the robot Mastermind under the guise of Roma, who tried to take control of Otherworld, destroying a lot of the Captain Britain Corps members. The Cherubim were used as Mastermind's elite corps.

The robot was eventually defeated by the newly formed Excalibur, and Captain Britain was appointed Otherworld's new leader and he used his powers and Excalibur sword to cure all Warpies present, included the Cherubim. The Warpies were now ordinary human children again.

It is unknown were the Cherubim and the other Warpies goes after that, if they stayed on Otherworld or goes again on Earth-616.

Like this? Let us know!
Retrieved from "https://marvel.fandom.com/wiki/Cherubim_(Earth-616)?oldid=5694778"
Community content is available under CC-BY-SA unless otherwise noted.