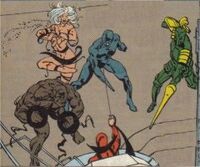 The Chess Set attempted to auction off the remains of former Gamma Flight members, Auric and Silver, and a civilian scientist.[1] Auric and Silver had been experimented on by the Sphinx and his agents in an exploration of superhuman powers.[2] The scientist who discovered their corpses claimed that their bodies gave him powers so the corpses were stolen and added to the auction block for an event the Chess Set had organized. Alpha Flight (Gamma Flight's successor) tracked down the event, with the aid of Spider-Man.[1]

There the Brass Bishop explained that the energies that had been collected as part of the Sphinx's experiments were now stored in the bodies of the two siblings and the scientist. During the battle between Alpha Flight, Spider-Man, and the Chess Set, the energies pooled into the scientist and he became a new, merged, being. Seeking vengeance, the new being lashed out at the Chess Set, planning to kill them. Alpha Flight's leader, Guardian convinced the being that to honor the memories of Auric and Silver, it should not kill the Chess Set. Agreeing, the being disappeared.[1]

Retrieved from "https://marvel.fandom.com/wiki/Chess_Set_(Earth-616)?oldid=3592675"
Community content is available under CC-BY-SA unless otherwise noted.