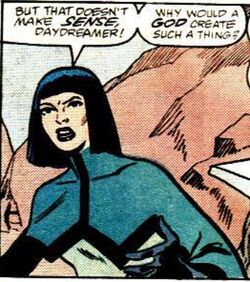 While awaiting the next visit of the Celestials to Earth, the deities of the planet decided to find a way to convince the visitors that humankind was worthy of survival. Over the span of ten centuries, these deities selected twelve ordinary men and women as a sample of humanity. Each of the chosen had mastered one of humanity's greatest fields of achievement. Each of these humans was endowed with godlike powers.[1]

Chi Lo was a Japanese woman, originating from a small seacoast village. She was reportedly well-educated, but chose the life of a farmer for herself. She mastered the skills of her chosen field. She lacked in assertiveness, but made up for it in determination. Once Chi Lo set a goal for herself, no obstacle could prevent her from achieving it. When she was 19-years-old, in the early 1970s, Chi Lo was chosen by the deities as a member of their sample of humanity.[1]

Harvest has the power to control any plant life.

Like this? Let us know!
Retrieved from "https://marvel.fandom.com/wiki/Chi_Lo_(Earth-616)?oldid=5790162"
Community content is available under CC-BY-SA unless otherwise noted.