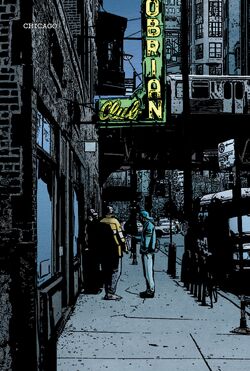 In the late 1800s, Chicago was where mad scientist Professor Chalis began his experiments in expanding human growth. His experiments were protested by the local scientific community forcing Chalis to flee Chicago before the authorities shut down his lab. The scientist relocated to Leadville, Texas to continue his inhuman experiments.[3]

In 1871, the city was hit was an out of control fire. The citizens of Chicago surged towards the piers of the Chicago River, causing numerous casualties due to the press of people.[4]

In the early 1940s Robert "Flash" Foster was an up and coming football player at Midwestern University.[5]

Chicago was one of the hubs for a nation-wide drug trafficking operation run by the mysterious Voice. His operations, including the one in Chicago was destroyed by the robot known as Electro, an invention of Professor Phil Zog.[6]

During World War II, when supplies were being rationed for the war effort, Chicago saw a boom in the black market trade of beef. The black market was later exploited in 1943 by the Nazi Butcher and his Nazi spies. They began selling tainted beef to unsuspecting buyers, poisoning many until they were shut down by the Human Torch and Toro.[7] In 1944, a train bound for Salt Lake City, Utah was sabotaged by the Nazi operative known as the Jackal, he was brought to justice by the Torch and Toro.[8] 1946 saw banks in the Chicago area robbed by twin criminals Jeff and Jock Blintz until they were apprehended by the Whizzer.[9] Later when the United States was under siege by the Robe's criminal organization, Chicago was one of the cities that was targeted by his nation wide crime spree until it was shut down by Captain America and Bucky.[10]

While stopping in Chicago to refuel their jetcopter, on his flight from the West to New York in answer to a call from the Teen Brigade, the Avengers watched Captain America demonstrate the many ways he can use his famous colorful shield.[11]

Nick Fury helped Peter Parker make new identities for his family and they moved to Glenview, Illinois, a northern suburb of Chicago.[14]

Chicago on Earth-1610 appears similar to the one on Earth-616. An Avengers team encountered the Ghost Rider for the first time outside of O'Hare Airport [15]. Later Hydra agents attacked and disrupted the Chicago Stock Exchange. President Steve Rogers donned his Captain America guise and personally defeated these terrorists. [16]

Like this? Let us know!
Retrieved from "https://marvel.fandom.com/wiki/Chicago_(Illinois)?oldid=5795783"
Community content is available under CC-BY-SA unless otherwise noted.