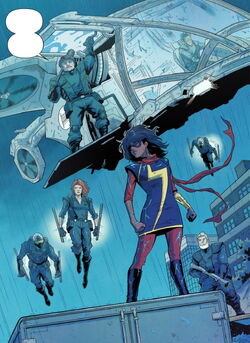 After the Champions battled an Asgardian Dragon left over from the War of the Realms and the subsequent damage done to Coles Academic High School by malfunctioned Viv Vision, Underage Superhuman Welfare Act ("Kamala's Law") had been passed that outlawed superhero activity involving those below twenty-one years of age. This led formation of an organisation called C.R.A.D.L.E. (Child Hero Reconnaissance And Disruption Law Enforcement) consisting of Justice, Carolina Washington, Jake Oh, Dum Dum Dugan, Speedball, and Timeslip to police and enforce this law via detention of any underage young heroes who violated Kamala's Law.[2]

C.R.A.D.L.E. made their presence known by raiding West Coast Avengers' HQ; and by going after superheroes like Moon Girl at her home and Ironheart at her Chicago. They commandeer the Champions Mobile Bunker while arresting Snowguard and Locust, and hung wanted posters of Ms. Marvel in Jersey City.[2] On the day of the law passing into action, they tried to arrest newly reformed Power Pack who had intervened to stop the Boogeyman,[3] but failed due to the intervention of "Agent Aether" (The Wizard).[4]

C.R.A.D.L.E. led by Dum Dum Dugan approached to arrest Spider-Man in Brooklyn for violation of Kamala's Law but were defeated by Spider-Man as they underestimated him. Later, Brooklyn Visions Academy was put under forced inspection to locate other teen vigilantes and compel students to sign a pledge to report any vigilante activity. Barbara Rodriguez and other students protests leading to their mass arrest for refusing to sign but they were released by Captain America.[5][6]

After waking from comatose, Ms. Marvel makes an unexpected announcement that her team won't go down without a fight. C.R.A.D.L.E. receive an encrypted message from Viv about a secret gathering. C.R.A.D.L.E. led by Justice attacked the abandoned warehouse where the young superheroes had gathered to plan their next move. Justice tried to explain them the dangers of being young superheroes, but a brawl breaks between them. They arrested Bombshell and Wasp while others were teleported to safe place by Pinpoint.[1]

C.R.A.D.L.E. led by Dum Dum Dugan later tracked Ms. Marvel and try to arrest her in even after she had saved people from a flood. Ms. Marvel eventually escaped after defeating them. C.R.A.D.L.E. with information from Zoe Zimmer continuously hunt for Ms. Marvel but withdrew after she and Dum Dum Dugan unlikely joined forces to defeat Monopoly.[7][8]

Bombshell, Locust, Snowguard, and Starling were being forced in Re-education Center for brainwash by C.R.A.D.L.E. Snowguard and Bombshell managed to free themselves using their powers, but are again captured by time-traveling Timeslip. Later C.R.A.D.L.E. emerged at Chicago when protests erupted, where they encountered some active members of Champions: Ms. Marvel, Nova, and Spider-Man who had been monitoring the protests. They tracked them Ironheart's home but Champions eventually escaped them.[9]

C.R.A.D.L.E. continued to hunt Champions but were forced to stop after Cyclops rescued his former teammates and granted them asylum at Krakoa.[10]

Retrieved from "https://marvel.fandom.com/wiki/Child_Hero_Reconnaissance_and_Disruption_Law_Enforcement_(Earth-616)?oldid=6512454"
Community content is available under CC-BY-SA unless otherwise noted.