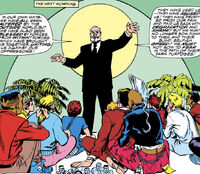 The Children of Heaven were a group of runaway mutant children who were brought together by Phillip and indoctrinated them into his cult-like group. In reality, Phillip used his cultists to perform various shady deals, including those in pornography and drugs, using force when they would not oblige him. Archangel, who followed a drug deal back to the cult, fought off the group, a battle which ended when Beth, one of the most victimized cultists, sent a psychic bolt through Phillip's head. Phillip was taken into custody by the Police. Some of the members left, but Beth, Mike, Slimeball, Voodoo, and presumably a few others decided to stay together to help other kids with similar problems. Archangel offered for them to come live at the Xavier Mansion but they turned him down.[1]

Retrieved from "https://marvel.fandom.com/wiki/Children_of_Heaven_(Earth-616)?oldid=5545683"
Community content is available under CC-BY-SA unless otherwise noted.