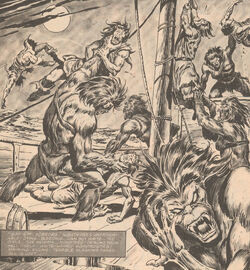 During the Pre-Cataclysmic Age (see notes), pirate Captain Ehestes Rhan was marooned by his crew on an isle west of Grebuhl, on August 12th, along a few ancient incantations books he possessed, though he claimed to have never dabbled in black magic. The crew also buried a treasure formerly plundered on the isle.

Stranded on the isle (that he named Zahrahn), he soon decided to avenge himself and punish the mutineers, while forcing them to respect the Ancients they despised. He studied the teachings of Set and Mhur from his books. He prayed to the Dark Ones, and to the Great Goat Gods and their brethren, unwillingly summoning a terrible creature only named as "the were-god". The creature seemingly forced Rhan to mate, and later spawned the monstrous Children of Rhan, rapidly aging girls that eventually transform into massive feral creatures if taken away from their birthplace, and causing the weariness of men. Rhan died, seemingly killed by the were-god.

The crew, now led by Captain Lahrentz, returned on May 6th. They found Rhan's skeleton, his log, the buried treasure, but also a group of Children of Rhan under the form of white-haired girls, that they took in, intending to sell them as slaves for an enormous profit. They loaded the ship with provisions and left the isle by May 10th. The Children of Rhan soon grew up to womanhood, were married to the crew, slaughtered them, and shipwrecked three hundred miles afar, on the coast which would become a valley in Vanaheim.

After the Great Cataclysm, the area around Zahrahn found itself above the ocean's level, the isle becoming a butte in the ravines of what became the northern part (see notes) of the Pictish Wilderness. The Picts shunned the place.[1]

Circa 10,000 BC, Conan the Cimmerian, on his to Vanaheim through the Picts (Earth-616) ended up in Zahrahn while being pursued by Picts. There, he slew an adult Child of Rhan and found a young one, believing to have killed her mother. Taking her with him to Vanaheim ([1]

Like this? Let us know!
Retrieved from "https://marvel.fandom.com/wiki/Children_of_Rhan?oldid=6444708"
Community content is available under CC-BY-SA unless otherwise noted.