Marvel Database
Register
Don't have an account?
Sign In
Advertisement
in: Reign of X, Comics, Children of the Atom Vol 1,
and 77 more
English

Children of the Atom Vol 1 1

View source
watch 01:32
She-Hulk Trailer Dropped - The Loop
Do you like this video?
Play Sound
Part of the Reign of X event

You are giving mutantkind a bad name, and that ends now!

The Children of the Atom stop an armed robbery by Helle's Belles in downtown New York City and are confronted afterward by a contingent of X-Men who give them feedback on their crime-fighting and offer for them to come live with the mutants on Krakoa. Once they decline, another group of X-Men debate whether they should get involved in encouraging them to come to the island. The teens return to their daily lives and after a day at school, they suit up in their adventuring costumes and head to a portal that would take them to Krakoa but once they try to enter, they cannot.

WHEN DID THE X–MEN GET SIDEKICKS?!

Now! Don’t miss the debut of the greatest teenage super hero team of all time! They’ve learned from the best, now they’re ready to be put to the test! But who the heck are these kids, and where do they come from? Guest-starring the X–Men! 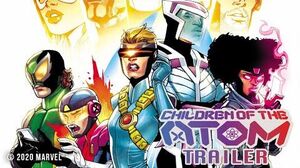