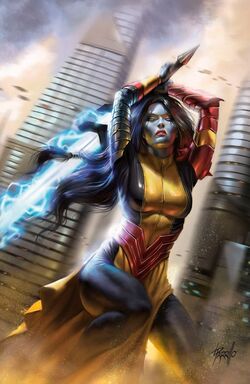 Chimeras were genetically engineered artificial mutants that combined DNAs of several past mutants to achieve combinations of their specific power sets.[1]

In the ninth life of Moira X, the population levels of mutants reached a crisis point, which combined with the constant evasion-relocation-confrontation efforts led the mutant leadership to approve the creation of the Sinister Breeding Pits on Mars, in which Mister Sinister focused on creating mutants with specific power sets.

After the successful development of the first generation of "fodder," which created simple clones from unaltered DNA, the second generation led to the creation of Chimeras with X-genes that combined the DNAs of two different mutants and their powers. The third generation Chimeras were even more powerful, combining up to five different X-genes; however, the fourth generation of Omega-based Chimeras was a colossal failure, which destroyed 40% of remaining mutants, caused the mutant nation of Krakoa to fall, and ended in the destruction of the Sinister Breeding Pits. The flaw was not random, but baked in by Sinister himself, who had betrayed and defected from the mutants' cause shortly before that.[1]

Like this? Let us know!
Retrieved from "https://marvel.fandom.com/wiki/Chimeras_(Mutants)?oldid=6429309"
Community content is available under CC-BY-SA unless otherwise noted.