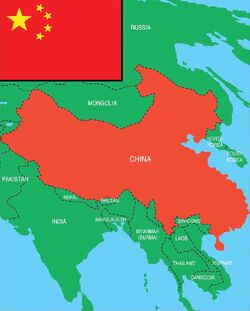 China, officially the People's Republic of China, in Asia, is the world's most populous state, with a population of over a billion The state is governed by its vanguard party based in the capital of Beijing. It exercises jurisdiction over 22 provinces, five autonomous regions, four direct-controlled municipalities (Beijing, Tianjin, Shanghai, and Chongqing), two mostly self-governing special administrative regions (Hong Kong and Macau), and claims sovereignty over Taiwan.

The land of China has a long history, one that is tens of thousands of years old. During the Thurian Age, a civilization known as the "East Folk" dominated the eastern side of the Thurian supercontinent. After the Great Cataclysm, they would be replaced by the Empire of Khitai, which was founded by the descendants of Lemurian refugees who had been enslaved by the East Folk and later rose up against their masters.[3] Khitai would become the largest empire in the Hyborian supercontinent, dominating the eastern part.[4]

There is a gap in the history of this land after the Lesser Cataclysm which ended the Hyborian Age; however, since approximately 2000 BC, inhabitants of this region began worshipping the race of superhumanly powerful beings known as the Xian (also known as the "Taoist gods" or "Chinese gods").[5]

Historically, China has been the center of one of the world's leading civilizations and the home of one of the greatest empires that man has created. Recent recorded history dates back over five thousand years, starting with the feudal Xia, Shang, and Zhou dynasties and then the imperial Qin, Han, Jin, Sui, Tang, Song, Yuan, Ming, and Qing dynasties of the Chinese Empire (of which two, the Mongol Yuan and the Manchu Qing were foreigners who conquered China). The Chinese empire was the longest, continuous empire in the history of mankind (from its unification in 221 BC under the Qin to 1912 AD the fall of the Qing) which was over 650 years longer than the Roman Empire (from its founding in 27 BC by Augustus to 1453 AD, the fall of Constantinople).

From the times of the ancient Greeks to the beginning of the Renaissance, it was the world's leading technological power, rivaled only by the Romans and the Hellenistic kingdoms of the eastern Mediterranean, a nearly two thousand year period.[6] Much of this time was spent under the rule of Han Chinese dynasties (except for the Mongol Yuan and Manchu Qing). During which time the rule of the Han Chinese dynasties extended as far west as into Central Asia reaching the Aral Sea and going into Afghanistan (Han and Tang dynasties), and as far north as the border regions of southern Siberia (Tang dynasty). The Tang dynasty conquered the steppe empire of the Turks (Gokturk Khanate which ruled Mongolia, Xinjiang, and Central Asia) and before it, the Han dynasty conquered the steppe empire of the Huns (Xiongnu who ruled Mongolia and Xinjiang).

The modern nation-state of China emerged in the early 20th century. It was invaded by Japan and participated in World War 2 as one of the Allies. During the later part of the 20th century, the Communists emerged victorious over their rivals the Nationalists in the civil war and were afterwards involved in the Cold War. The People's Republic of China participated in at least one conflict, the Korean War.[1] By the early 21st century, China had once again become one of the leading economies of the world.[1]

In the People's Republic of China, many of its superhumans are drafted to serve the government, including mutants. Those superhumans who pose a threat to the state (e.g. instinctual thinkers) are imprisoned or eliminated.[10] Several teams of superhumans that were officially sanctioned by the government are known to exist or have existed, such as China Force, People's Defense Force, Dynasty, and the Ascendants. The government is known to have two paramilitary organizations equipped and trained to deal with superhuman and/or alien threats, the People's Protection Agency and S.P.E.A.R..

China is home to various secret societies, of which five of them are worldwide organizations. Which are the shadowy organizations of the Five Weapons Society, the Celestial Order of the Si-Fan, the Celestial Order of the Hai-Dai, the Atlas Empire, and the Triads (organized crime syndicates). The ancient secret society of Hydra has had a long history in China, as far back as the late 3rd century BC during the birth of the Chinese Empire. The Snakeroot ninja clan that were the progenitors of the Hand and formed its inner circle, had its origins in China. It is home to at least one of the world's major multinational corporations (Taiji Corporation, and various foreign multinational corporations have operations within China, most importantly Stark International, Kronas Corporation, and Roxxon Energy. The elite social club (and secret mutant conspiracy) of the Hellfire Club likewise has a presence in China.[10] Three and perhaps four of the Seven Capital Cities of Heaven are located in China, which are Peng Lai, K'un-Zi, and Under City, and perhaps Tiger Island. Another one, K'un-Lun is located in a pocket dimension within China's borders.

On Earth-8311, the Mandaringtail had his castle headquarters in China, before being arrested by S.H.E.E.P..[11]

Like this? Let us know!
Retrieved from "https://marvel.fandom.com/wiki/China?oldid=6492266"
Community content is available under CC-BY-SA unless otherwise noted.