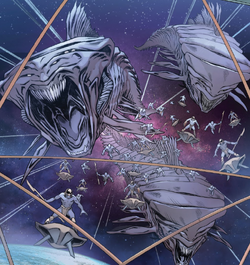 The Chitauri Wave was a fleet of Chitauri lured to Earth by the Hydra sleeper agent Captain America using a rejected plan created by the Red Ghost for his Soviet superiors.[1] The plan consisted on hiding Chitauri queen eggs on Earth, with their presence driving the aliens into a frenzy to find them, ravaging anything in their path.[2]

The amount of Chitauri swarms that attempted to enter the Earth began to grow in both number and frequency. At one point, the Alpha Flight space initiative had to fend off the planet from four Chitauri waves in a single month.[1] After a gigantic Chitauri fleet was destroyed by Quasar, it was expected that the next Chitauri fleet would be the largest single alien army to ever come to the Earth, and even bigger than the Annihilation Wave.[3]

Another Chitauri fleet was approaching the Earth as the Hydra-loyalist Captain America was putting into motion a plan of conquest. While Alpha Flight and numerous other heavy-hitter heroes were deployed in orbit to fight the aliens, Captain America activated the Planetary Defense Shield, sealing the heroes off from Earth. The Chitauri Wave continued mobilizing despite not being able to enter Earth, wearing off Alpha Flight and the heroes that were left stranded.[4] The Planetary Defense Shield was eventually destroyed by Quasar, and Captain Marvel destroyed the Chitauri queen eggs, whose location had previously been pin-pointed, putting an end to the Chitauri invasion.[5]

Like this? Let us know!
Retrieved from "https://marvel.fandom.com/wiki/Chitauri_Wave_(Earth-616)?oldid=5545696"
Community content is available under CC-BY-SA unless otherwise noted.