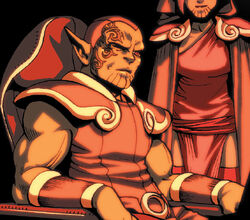 Always remember, when you face a superior opponent, learn their weaknesses. Exploit them. That is the Skrull way.

Chrell was once a training instructor for Super-Skrull Program trainees, such as; X'iv, Xavin, and even Kl'rt.

Despite original lacking any beliefs, Chrell joined the Skrull Invasion Force against Earth, where he began to hunt down the two Skrull Princes; Xavin and Dorrek VIII.

However despite being able to take down the Runaways, Chrell struggled against Xavin, Dorrek VIII, Wiccan, Speed and Karolina Dean; because of this he required the assistance of the Skrull assassin X'iv.

Although not even the assassin's help was enough, thus Chrell decided to go supernova. Unfortunately for Chrell, the Runaway Xavin was able to contain his supernova and thus he only succeeded in killing himself.[citation needed]

Like this? Let us know!
Retrieved from "https://marvel.fandom.com/wiki/Chrell_(Earth-616)?oldid=5352727"
Community content is available under CC-BY-SA unless otherwise noted.