watch 02:19
Exclusive: 'Dark Phoenix' Comic Writer Chris Claremont Talks About Jean Grey
Do you like this video?
Play Sound
For fictional versions of Chris Claremont as a character within comic books and/or other media,
visit this disambiguation page.
Chris Claremont 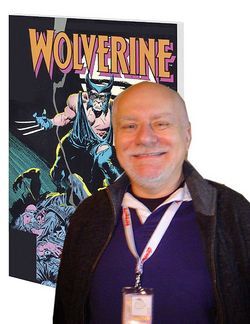 Chris Claremont is a writer of American comic books, best known for his 16-year (1975-1991) stint on Uncanny X-Men, during which the series became one of the comic book industry's most successful properties.

Claremont is regarded as one of the hallmark Marvel Comics writers, having written one of the flagship titles, the Uncanny X-Men, for sixteen consecutive years (he is the record-holder for having the longest run as a single writer on an American comic book title). Claremont excelled at the task of writing good "team" arcs, in which every member of the ensemble cast of X-Men had his or her moment to shine. He was lauded for writing action-packed stories with strong characters, both heroes and villains, mixing it with soap opera elements and always bringing in the social undercurrent of mutants being a harassed minority. Claremont also promoted strong female characters such as Rogue, Storm and Moira MacTaggert, who were a far cry from the token roles usually reserved for women at that time. Claremont's approach set the standard for team-based comic books for decades.

The most common criticism of his work is his overly descriptive writing style. Claremont's characters have spoken in long paragraphs that are often called forced or unrealistic. He has frequently employed third-person omniscient narration to describe events that might easily be conveyed in the art and (to some) unneeded thought bubbles to spell out character motivation and personality, especially during action scenes. He is also known for certain characteristic phrases, (for example, Wolverine's catchphrase, "I'm the best there is at what I do. And what I do... isn't very nice") known as "Claremontisms" among fans.[1] However, this may not be a valid criticism as these phrases have become a part of the various characters' fictional personalities and have been repeatedly used by others as a tool of characterization.

He has also been criticized for what readers and critics have seen as his inability or unwillingness to bring plots to fruition. He has also tended to revisit certain characters repeatedly over his career, such as Captain Britain and Rogue.

Nonetheless, Claremont's work on X-Men, which was longer than that of any other creator, defined many of the X-Men characters and made an indelible impression on what he made into a franchise.

Claremont's first work at Marvel Comics was on Daredevil #102. This was an assignment given to him by then current Marvel EIC Roy Thomas. As an entry into comic writing Claremont was given the fledgling title Iron Fist in 1974 that also teamed him with John Byrne for the second time. (The first was on Marvel Premiere, where Byrne did Fist's last two appearances.) Len Wein then gave him the writing duties for the relaunched X-Men. Claremont also found narrative excuses to sideline Professor X, as one of the problems with the original X-Men series was that the Professor would appear at the end of the story to magically correct the situation no matter how dire.

During his years as X-Men writer, Claremont wrote or co-wrote many classic stories such as the "Dark Phoenix Saga" and "Days of Future Past". He also co-created numerous important X-Men characters, including Rogue, Psylocke, Shadowcat, Sabretooth, Mystique, Emma Frost, Jubilee, Rachel Summers, Mister Sinister, Madelyne Pryor, and Gambit. In addition, he helped launch best-selling spin-offs such as X-Men, New Mutants, Excalibur, and Wolverine. In 1986 Marvel launched an X-Men spinoff, X-Factor, altering the Phoenix/Jean Grey continuity Claremont had established. In 1991 he left Marvel over differences with the editorial staff.

In 1998, he returned to Marvel as editorial director and the regular writer of Fantastic Four. He also wrote a Wolverine story arc. In 2000, as part of the company's "Revolution" event, he wrote Uncanny X-Men and X-Men until he moved to X-Treme X-Men with penciler Salvador Larroca.

In 2006, cardiac illness forced Claremont to postpone the beginning of a planned run on Exiles as well as the launch of GeNext. Also cut short was his run on Uncanny X-Men, which was completed by Tony Bedard over Claremont's plots. Likewise, writer Frank Tieri took over on New Excalibur in Claremont's stead for a time.

In 2007, Claremont returned to New Excalibur, writing a story arc where the character Nocturne has a stroke. It is believed that he used his recent illness as inspiration.[2]

Claremont has written many stories for other publishers including the Star Trek Debt of Honor graphic novel, his creator-owned Sovereign Seven for DC Comics and Aliens vs Predator for Dark Horse Comics. He also wrote a few issues of the series WildC.A.T.s (volume 1, issues #10-13) at Image Comics, which introduced his creator-owned character, Huntsman.

Outside of comics, Claremont co-wrote the Chronicles of the Shadow War trilogy, Shadow Moon (1995), Shadow Dawn (1996), and Shadow Star (1999), with George Lucas. This trilogy continues the story of Elora Danan from the movie Willow. In the 1980s, he also wrote a science fiction trilogy about female starship pilot Nicole Shea, consisting of First Flight (1987), Grounded! (1991), and Sundowner (1994). Claremont was also a contributor to the Wild Cards anthology series.

He has a cameo in the film X-Men: The Last Stand during the Jean Grey prologue, for which he is credited as "Lawnmower man".

Retrieved from "https://marvel.fandom.com/wiki/Chris_Claremont?oldid=6549222"
Community content is available under CC-BY-SA unless otherwise noted.