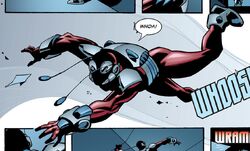 Chris McCarthy was a low level S.H.I.E.L.D. agent working in the reconnaissance department on the Helicarrier. When Wolverine was brought in,[1]

Chris and his friend Eric O'Grady, who he grew up with, were tasked with guarding Dr. Henry Pym's lab by a higher ranking agent, Mitch Carson. When Pym went to leave the lab, Eric and Chris panicked and Eric attacked Pym, knocking him unconscious.[2]

Inside the lab, they found the most recent version of Ant-Man's Suit, which Chris put on and promptly activated, shrinking down. Thinking him gone, Eric panicked again and ran off. Chris promptly got lost in the Helicarrier, stuck at the 1-Inch size. Eric, meanwhile, took this opportunity to make a pass at Chris' girlfriend Veronica King, which the miniature Chris saw from an air vent.[2]

Around this time, a group of Hydra employed superhumans attacked the Carrier, and Chris and Eric were caught up in the ensuing chaos. Whilst trying to find a safe place to hide, Chris was killed, and Eric took Ant-Man's Suit off his body. Surviving the Helicarrier crash, Eric continued to work for S.H.I.E.L.D., using his evenings to explore the powers of his new suit.[3]

As Ant-Man he has the normal human strength of a man of his age, height, and build who engages in intensive regular exercise. At small size, his is compact and at large size are enhanced.

Like this? Let us know!
Retrieved from "https://marvel.fandom.com/wiki/Chris_McCarthy_(Earth-616)?oldid=5431748"
Community content is available under CC-BY-SA unless otherwise noted.