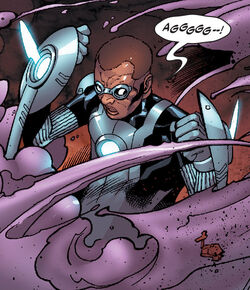 Radian was one of the many mutant teenagers that enrolled into the Xavier Institute after the revelation to the public that Professor X was a mutant. He and his sister Tattoo manifested their powers during church, leaving him temporarily blind. When Cassandra Nova made her second attack on the school, Radian and the other students were ready to face her. But instead, they were put under her control and turned against the X-Men. Radian and the others were freed soon after thanks to the intervention of the Stepford Cuckoos.[citation needed]

After the death of mutant fashion designer Jumbo Carnation, Radian joined the Omega Gang, led by fellow student Quentin Quire, also known as Kid Omega. Radian and the Omega Gang participated in an assault on a small group of human racists, and after, a team of U-Men.[citation needed]

The Omega Gang then caused a riot at the Xavier Institute during Open Day, where the school was going to accept human students. During the riot, Radian was stopped by Cyclops, who broke his leg with his optic blasts. Afterwards, Radian, along with Redneck and Tattoo, were sent to a jail run by humans.[citation needed]

Radian was one of many mutants that lost their superhuman powers after M-Day. After that, he joined the New Warriors under the guise of Phaser. His sister, who'd joined the team as well, died fighting alongside the team against the new Zodiac.[2]

After the Warriors traveled to Earth-81156, the team disbanded and Cord kept his technological armor with him,[3] but was not reported acting as a hero since.[4]

None. Christian Cord was formerly a mutant, who possessed the following ability:

Like this? Let us know!
Retrieved from "https://marvel.fandom.com/wiki/Christian_Cord_(Earth-616)?oldid=6432989"
Community content is available under CC-BY-SA unless otherwise noted.