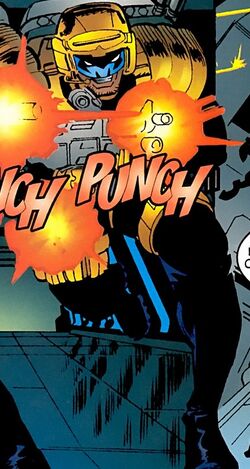 Christoph Nord seemingly had a similar history as his Earth-616 counterpart.

As David North, he became an agent of Weapon X and joined their black ops team, Team X. Circa 1970, Team X was sent to destroy the Numidian Army's super-soldier program. North, Victor Creed, and Logan broke into the facility while John Wraith ran surveillance from the Lockheed SR-71 Blackbird. Once inside, they were confronted by Madamoiselle Mirielle Duplessis and Omega Red, mercenaries hired by the Numidian Army.

Seemingly those of the Christoph Nord of Earth-616.

Seemingly those of the Christoph Nord of Earth-616.

Like this? Let us know!
Retrieved from "https://marvel.fandom.com/wiki/Christoph_Nord_(Earth-7642)?oldid=4604607"
Community content is available under CC-BY-SA unless otherwise noted.