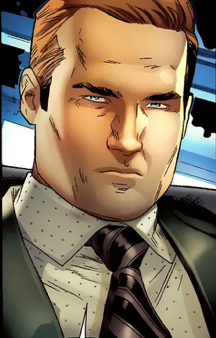 Christopher Bach was the leader of the Humans Now anti-mutant movement.[1]

He paid Astra to resurrect Magneto's clone Joseph. His plan was to make humans afraid of Magneto again, so Bach would gain more followers.

After Magneto defeated Joseph, he could not resist provoking nearby humans into arming themselves with nearby chunks of concrete and rebar against the two mutants. Quietly angered by this, Magneto crushed him under rubble.[2]

Like this? Let us know!
Retrieved from "https://marvel.fandom.com/wiki/Christopher_Bach_(Earth-616)?oldid=5684995"
Community content is available under CC-BY-SA unless otherwise noted.