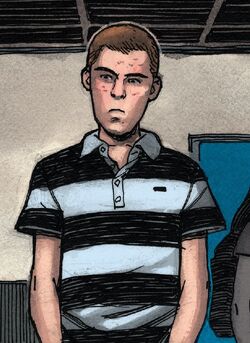 Chris Kinzky was a student attending Alexander Hamilton High School in Fairfax, Virginia. He was the partner in Chemistry lab of Viv, the Vision's daughter.

After the Visions' home was attacked by the Grim Reaper and Viv ended up fatally damaged, she was absent from school for a couple of days. One day during lunch, Chris approached Viv's brother Vin to ask for Viv's phone number, as he had no idea of her whereabouts. Vin had been left distraught by Viv's condition, so he barely reacted to Chris' inquiries, causing the young boy to become annoyed and end up taking harshly. In response, Vin strangled Chris until he was unconscious.[2]

Once Viv reintegrated to school, Chris approached her and, on their way to her classroom, he told her that his father Leon demanded for Viv to be separated from Chris, on the grounds that the two siblings were dangerous. Chris didn't agree with his father's view, and expressed to Viv that unlike most of the students at the school, he thought she was "cool." He additionally appeared to be forgiving of Vin's attack, brushing off their encounter as "not as big as everyone said."

The following night, Leon invited Viv's mother Virginia in order to blackmail her into leaving the state. While in his room, Chris was awakened by their conversation, and proceeded to follow his father's voice to the living room, curious of what was happening. When the discussion between Virginia and Leon escalated, he took a firearm and shot at her. However, Virginia phased through the bullets. Chris had just entered the living room, and two of the stray shots hit him, killing him immediately.[3]

Virignia fled the scene after knocking out Leon, causing him to slip into a coma. Chris' death was surrounded by mystery due to the lack of clues on the events that happened when he lost his life.[4] However, before commiting suicide, Virginia confessed the series of events that led to Chris' death to the detective in charge of investigating his death, Matt Lin.[5]

Like this? Let us know!
Retrieved from "https://marvel.fandom.com/wiki/Christopher_Kinzky_(Earth-616)?oldid=5283462"
Community content is available under CC-BY-SA unless otherwise noted.