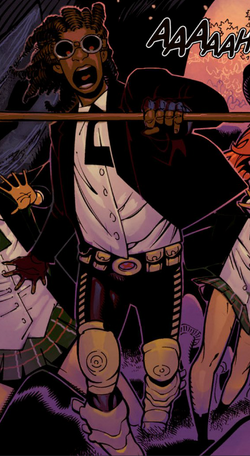 Christopher and his friends were out one night when one of his friends fell and hit her head. She appeared dead until Christopher touched her and healed her. When word of this miraculous healing got out, Christopher was apprehended by the Ann Arbor police for questioning. Shortly after his unlawful detainment, Christopher was rescued by Cyclops and Magik.[1]

They brought him to the former headquarters of Weapon X Project in Canada. There he met Eva Bell and the two formed a friendship.[2] Christopher eventually chose the mutant name Triage.[3]

He remained with the team through the incident in Limbo,[4] and showcased some flirtatious actions towards several female members,[5] with Irma Cuckoo being his primary interest of late.[6] He later assisted in the battle against the Blockbuster Sentinel by healing the civilians caught in the crossfire and Eva after being knocked out by a blast.[7]

Later, he was detained and coerced into using his powers for O*N*E; however, when he eventually refused and spit on his boss, he was forcibly administered the X-gene cure, which led to his death for which O*N*E had little remorse.[8]

Christopher was later resurrected by the Five in Krakoa and joined the mutant nation. He was seen at the Green Lagoon hanging out with other mutants.[9]

Christopher is a new mutant activated after the Phoenix dispersion, and has displayed the following mutant powers:

Like this? Let us know!
Retrieved from "https://marvel.fandom.com/wiki/Christopher_Muse_(Earth-616)?oldid=5850672"
Community content is available under CC-BY-SA unless otherwise noted.