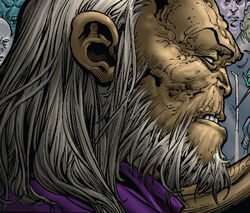 Chronos was a member of the Inhumans. In the modern era, Chronos sat on the Inhuman council during the second reign of Maximus the Mad. He was present during a special convocation to discuss recent developments in the Skrulls secret invasion of Earth. He was concerned with security issues stemming from the revelation that their former liege Black Bolt had been replaced with a Skrull agent. He was also concerned with Earth-based intelligence that might help determine if there were any other Inhumans who were secretly Skrull spies.

Like this? Let us know!
Retrieved from "https://marvel.fandom.com/wiki/Chronos_(Earth-616)?oldid=5257377"
Community content is available under CC-BY-SA unless otherwise noted.