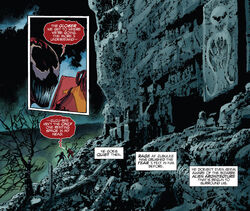 A mysterious tropical island in the Timor Sea, the Chthonic Island[citation needed] was not found on any maps; its location only being recorded in the Darkhold and privy to high-ranking members of the Darkholders.[1] Though the Timor Sea was traveled by Europeans as far back as circa 1500 AD, but nobody reported anything being at the coordinates of the island,[2] located southeast of Java,[1] two hundred nautical miles east from Kupang.[3]

The island was populated by the Broodlings of Chthon, a reptilian race created by the dark elder god Chthon, which lured in passing sailors in order to sustain their population.[3]

One such group of sailors, a 19th-century whaling vessel came to isle in june 1821, and left a cemetery behind where the crewmen killed as sacrifices (after being raped) by the Broodlings were buried.[3]

A Temple of Chthon was located in the depths of the jungle at the center of the island, constructed using eldritch architecture;[4] however, this temple was destroyed when Carnage used it to open a rift to K'lay in order to free the elder god.[5]

Like this? Let us know!
Retrieved from "https://marvel.fandom.com/wiki/Chthonic_Island?oldid=6048145"
Community content is available under CC-BY-SA unless otherwise noted.