Chuck Grimm is the son of Ben Grimm and Alicia Masters-Grimm, he is one of two identical twins. His brother is named Buzz. Buzz and Chuck were originally raised by their folks at their home on Yancy St. They were big fans of the stunt proformer Daredevil.

The twins involvement in the super-hero community was very limited in recent history on Earth-9997, however after the Celestial Embryo at the Earth's core was destroyed, the Grimm family moved to Castle Doom in Latveria to live with Reed Richards while he attempted to find a way to reverse the mutations in humanity caused by the Terrigen Mists in the atmosphere. 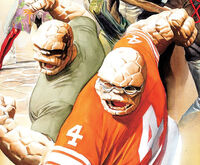 After the death of Captain America, Buzz's parents were asked to carve Cap's face into the side of Mount Rushmore and so the Brothers Grimm were left in the care of Reed Richards and his newly resurrected wife Sue. During this time, Castle Doom was attacked by followers of the Church of Immortus who came to douse the Human Torch that was burning the Terrigen Mists out of the air. Buzz and his brother Chuck helped defend Reed and Sue from the attackers until they were helped by a group of mutated humans dubbed the "Monster Generation", however they were unable to stop Mr. Church (secretly Mephisto) from stealing Dr. Doom's time machine.

After the battle, the Brothers Grimm became smitten by the Monster Generation member, Viki. When Reed figured that the world was about to be destroyed due to the lack of Vibranium to stabilize the planets rotation, he herded the boys into the Inhumans' ship to leave Earth. However, this did not come to pass.

Buzz and Chuck has since remained at Castle Doom, helping out the sick and those unable to die since Mar-Vell was able to kill Death in the Realm of the Dead. They were seen cheering on the Hulk when there was yet another "who's the strongest" competition between the Thing and the Hulk. They also tagged along with their father when he took Reed Richards and the Daredevil's to the Florida Everglades to awaken Jude the Entropic Man.

As the son of Ben Grimm, Chuck has inherited his fathers rock like physique as well as the durability and the strength to match his age, height and weight. The exact extent of Buzz's strength will probably increase with age as he is still a growing boy.

Super-human to some degree, at most equal to that of his father in his prime.

Chuck has access to the equipment available in Castle Doom.

Retrieved from "https://marvel.fandom.com/wiki/Chuck_Grimm_(Earth-9997)?oldid=5762156"
Community content is available under CC-BY-SA unless otherwise noted.