Church of the New Darkness 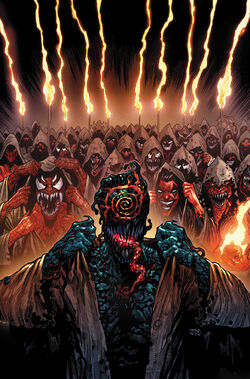 When a pair of symbiote dragons - one black and one red - arrived on Earth and began rampaging across Denmark, a cannibalistic cult was formed that took to worshiping them and erecting grotesque monuments.[2]

After the defeat of the black symbiote dragon - dubbed the Grendel - at the hands of Thor, pieces of its living abyss fell to earth and bonded to human hosts; imbuing them with knowledge of the primordial god of the abyss, Knull, who had been sealed away at the core of Klyntar by his own creations when they rebelled against him.[3]

Crossing the Atlantic Ocean to North America at some time prior to the 15th century, the cult established a foothold in the forests and caves near what would eventually be known as Westchester County, preying upon the Wappinger and other local indigenous tribes who intruded into their territory.

When Italian explorer Giovanni de Verranazzo led a party of soldiers into their territory in 1524, the cult ambushed and sacrificed several of them, causing de Verranazzo to flee back to Europe. In 1664, the cult attempted to abduct Molly Ravencroft, who managed to escape. When her husband Cortland Kasady came to rescue her and strayed too deep into their caves, the cult ambushed him and infected him with living abyss - corrupting his bloodline in the process.[1] By the late eighteenth century, the Others had mysteriously vanished from the region and their whereabouts until the early twenty-first century are unknown.[4]

Secretly enduring into modern times, the cult accrued enough resources and members to form paramilitary units, research teams, and field mobile command centers.[3][5] The cult began posing as a legitimate religion and calling themselves the Church of the New Darkness, constructing a temple to Knull disguised as a cathedral.[6] After the nihilistic serial killer Cletus Kasady - a distant descendant of Cortland Kasady - bonded to a symbiote and began calling himself Carnage, the cult took to revering him as the prophet of Knull; to the point of concocting a narrative about how Knull had chosen Cletus as his emissary from birth.

At some point, the Scorn symbiote fell under Knull's influence and corrupted its host, Tanis Nieves, who became a high-ranking member of the cult.[3] When Knull's resurgence was foiled by Venom,[7] Tanis decided to resurrect Carnage and turn him into Knull's avatar. To enact this plan, she led a squad of soldiers to retrieve Cletus Kasady's corpse after it fell to Earth, and sent another squad to retrieve a sample of the Grendel symbiote from Project Oversight. Tanis bonded the sample of the Grendel symbiote to Cletus, reanimating him and connecting him to Knull. Rather than submit to Knull's control, Cletus ripped out Scorn's spine and consumed the Carnage symbiote's codex - trace remnants of the symbiote left over from her time as its host - which prevented Knull from taking over him. However, Carnage decided to free Knull and assumed command of the cult, setting out to hunt down former and current symbiote hosts to devour their codexes and symbiotes.[3]

Carnage's first move was to conquer the Underground City of San Francisco - which Venom had once protected - and establish a Spire of living abyss at its center, enslaving its citizens by infecting them with pieces of his symbiote and sending them to hunt down former symbiote hosts; though this alerted the Venom symbiote to his return.[8] Carnage then recruited his old allies Shriek and the Doppelganger to his cause. Shriek resumed her alias of "Sandra Deel" and began acting as the cult's public face, acquiring the Last Chance Church in Doverton, Colorado - which Carnage had once conquered years earlier - and renovating it into a temple to Knull. Shriek and Carnage subsequently converted the populace of Doverton to the cult and harvested their symbiote codices, leaving the city in ruins and alerting the Aberrant Crimes Division and Anti-Symbiote Task Force to their activities.[6][9]

Over several months, Carnage continued to hunt codexes,[10][11] at times assisted by a team of cultists acting as mission control and at times acting alone.[5] Under Carnage's control, John Jameson captured ACD agent Misty Knight and imprisoned her in Ravencroft. Returning to Manhattan, Kasady established another Spire underneath Grand Street, sitting out the War of the Realms.[12] Deciding to make his move, Kasady infiltrated Ryker's Island and killed Lee Price to claim his codices and the Mania symbiote,[13] before going after Eddie Brock - who was rescued by the Venom symbiote.[14] Summoning the Knull-corrupted Riot, Agony, Phage, and Lasher symbiotes to go after Normie Osborn,[15][16] Kasady compelled John Jameson to lure Spider-Man and Venom into a trap and took over Ravencroft Institute,[14] infecting Norman Osborn with an offshoot of the Dark Carnage symbiote to turn him into a copy of his original Carnage form, enslaving the inmates and turning them into a horde of four-armed Carnage doppelgangers, and resurrecting Demogoblin using Shriek as a vessel.[17] When Deadpool burned down Ravencroft,[18] Kasady returned to the Spire underneath Grand Street, unleashing his horde on the city - claiming Spider-Man (Miles Morales) and the resurrected Knull-corrupted Scream - which took over former Mania host Patricia Robertson - as minions.[19][20]

As the heroes retreated to Rex Strickland's warehouse to use the Maker's Symbiote Codex Isolation and Thermo-Heated Extraction machine to remove as many codices as they could, Dark Carnage disguised himself as Eddie Brock once more and infiltrated it. Upon being exposed, Dark Carnage summoned his horde to battle the assembled heroes, managing to assimilate the Venom symbiote into his own. Bonding to an amalgam of the codices, Eddie Brock killed Cletus Kasady with a Necrosword, reclaimed the Venom symbiote, and absorbed the Dark Carnage symbiote into it. The people being controlled by the Dark Carnage symbiote's offshoots were subsequently freed, though the cult's ultimate goal was achieved: by absorbing the codices and Dark Carnage symbiote, Venom had awakened Knull and unleashed him from his prison.[21]

While many of the cultists who had worshipped Knull prior to Dark Carnage assuming control of the cult were sacrificed to harvest codices or simply because Dark Carnage wanted to kill someone,[6][5][18] after Dark Carnage's death the cult retreated into the shadows to prepare for Knull's arrival. Infiltrating the newly-founded J.A.N.U.S. organization, the cult returned to the Ravencroft institute to reclaim Cortland Kasady's body and resurrect him.[22]

Equipment: While under Scorn's command, the cult was able to field paramilitary units equipped with combat armor emblazoned with Knull's dragon-emblem.

Retrieved from "https://marvel.fandom.com/wiki/Church_of_the_New_Darkness_(Earth-616)?oldid=5590283"
Community content is available under CC-BY-SA unless otherwise noted.