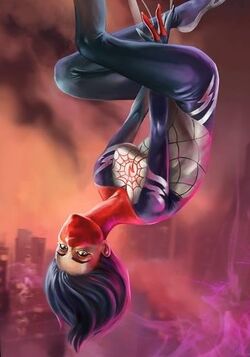 Him and me... it's complicated. But we're connected--and I can't ignore that.

While on the run from Morlun, Silk was recruited into S.H.I.E.L.D.'s Spider-Men. When Black Cat created a criminal empire, S.H.I.E.L.D. was assigned to infiltrate her gang.

When current and former Klyntar hosts going haywire, S.H.I.E.L.D. took Cindy out of cover to locate former hosts Hornet and Spider-Man, who had gone missing in action. While following Peter's trail, she was attacked by She-Venom only to be rescued by a Venom Symbiote possessed Peter Parker. She was later given an Anti-Symbiote Ray and used it to free Leslie Gesneria from the control of the Agony Symbiote.[1]

Like this? Let us know!
Retrieved from "https://marvel.fandom.com/wiki/Cindy_Moon_(Earth-TRN461)?oldid=6058285"
Community content is available under CC-BY-SA unless otherwise noted.