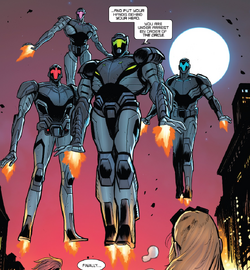 The Circle is a brotherhood based on Arthurian ideals and lead by Arthur, with the main purpose to defend Symkaria from Doctor Doom and Latveria. During an auction run by A.I.M., the Circle bought part of the replicated Extremis technology, creating new and better exoskeletons for their own purposes.

After they noticed Iron Man was in the search of the Extremis which A.I.M. stole, Arthur proposed Stark a wager: if Stark defeated the Circle's Extremis-enhanced pilots, he would be free to retrieve the Extremis. During the battle, Stark noticed a that the Circle's force field which protected their sample of Extremis was light-permeable, being able to destroy their Extremis using a potent U.V. laser causing the loss of all the Extremis they had left and rendering them unable to continue producing new technologies of their own.[1]

When the powerful material Phlogistone was found in the Moon, the Circle was sent to Tranquility Gulch, the human colony from which the Phlogistone was studied, as representatives of Symkaria.[2] They later helped Iron Man attack the embassy of the country of their common enemy, Doctor Doom, in an attempt to prevent any Phlogistone from reaching Doom's hands.[3] During the battle, Gawain died, but the Doombot army was destroyed and the Latverian presence in the Moon removed.[4]

The Circle ended up in Aniana to arrest members of X-Force for the theft of stolen goods but instead they ended up in a battle against Cannonball and Shatterstar when the two refused.[5]

Like this? Let us know!
Retrieved from "https://marvel.fandom.com/wiki/Circle_(Earth-616)?oldid=5545727"
Community content is available under CC-BY-SA unless otherwise noted.