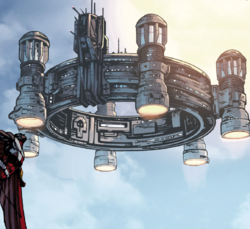 Origin
Created to be the main hub for China's first response and intelligence gathering organization.

The Circle is the main headquarters for the Chinese intelligence agency known as S.P.E.A.R.. Under the command of Director Xian Zheng, the Circle was built along with the organization after the invasion by Thanos. Feeling that they needed to be able to protect themselves, China wanted to be on the same level as S.H.I.E.L.D.. So they appointed Zheng to head up the project.

The Circle's main hub possessed over 150,000 operatives, analysts, and overseers, sixteen airships, and a science division, with the most sophisticated surveillance built by man. While entertaining Avenger member The Falcon, The Circle came under attack by the Gorgon and members of the Hand. To deal with the situation, Zheng revealed that the Circle was also home to their own special task force, The Ascendants.[1]

Retrieved from "https://marvel.fandom.com/wiki/Circle_(S.P.E.A.R.)?oldid=5512694"
Community content is available under CC-BY-SA unless otherwise noted.