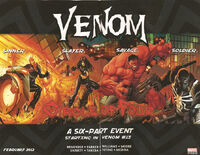 Origin
A plan of Blackheart to bring Hell to Earth.

In Las Vegas, the demonic son of Mephisto, Blackheart opened a portal to bring Hell to Earth and overthrow his father, but only managed to bring a part of it. Venom was a fugitive there, with Red Hulk wanting to bring him to the authorities. X-23 was there looking for who stole a sample of her blood. And the new Ghost Rider detected Blackheart's malevolence. Accidentally, the four heroes found themselves about to battle Blackheart.[1]

The villain created Antitheses of the four heroes to battle and torment them, Flash's being an Evangelist who used the symbiote, his father, and his drinking problem to fight him. Although the heroes battled well, they were ultimately killed.[2] In Hell, Mephisto offered the heroes a new chance to live in exchange for defeating Blackheart. They managed to get the Spirit of Vengeance, which had been trapped by Blackheart, and wanted to get it to Blaze, so he would become the Ghost Rider again. During the battle, Red Hulk and Venom were thrown away by Blackheart. Flash gave the symbiote to Red Hulk and it bonded with him as well as the Spirit of Vengeance, turning him into a gestalt being[3] known as the Circle of Four.[4]

Blackheart was defeated when his Antithesis was created by the Circle of Four using the mirror which created Antitheses. Meanwhile, Flash and X-23 helped Johnny Blaze to return Hell through the dimensional portal it came from and destroy it. When Las Vegas returned to normal, Red Hulk returned the symbiote to Flash and the Spirit of Vengeance to Alejandra, and she left the scene. When the Secret Avengers arrived, Captain America tried to take Venom to custody, but he convinced Cap to let him join the Secret Avengers, allowing Giant-Man and Beast to try to make the symbiote more controllable.[5]

Retrieved from "https://marvel.fandom.com/wiki/Circle_of_Four?oldid=5472278"
Community content is available under CC-BY-SA unless otherwise noted.