City Below the Seas 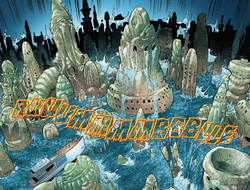 The City Below the Seas, home to the Dread Uluath as well as schools of Fishmen serving it.

He was summoned to the surface by the chants of Happyology. However, due to insufficient vibrations, Uluath himself was not summoned until Aegis arrived, and began stomping. This caused Uluath to arrive, but he was quickly defeated by Aegis, under Kid Kaiju's guidance.[1]

Like this? Let us know!
Retrieved from "https://marvel.fandom.com/wiki/City_Below_the_Seas?oldid=5363319"
Community content is available under CC-BY-SA unless otherwise noted.