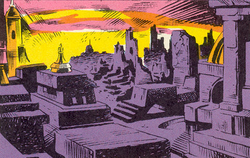 The City of Wonders, or Crystal City, was the capital of the kingdom of Valusia,[1] one of the Seven Empires of Thuria.

Qar, the First City of Wonder

A thousand years before Kull, King Eallal ruled over Valusia, until he was found hideously murdered in his throne room, killed by a Serpent-Man.[7]

Siege of the City of Wonders

After Sareena, daughter of the chieftain of the Atlanteans, was murdered in the City of Wonders during her wedding ceremony with King Kull, Atlantis and the Picts waged war against Valusia, attacking the City of Wonders. After Kull, Lhok-Nor, and Taku defeated the Wolf Men who were responsible for the senseless killing, the war immediately ended and an alliance was forged amongst the three nations.[9]

Some days after the wedding ceremony held by King Governi of Thule for the marriage of her daughter Elise with Rashver, son of the king of Verulia, Kull's old mentor Ram-Os entered his castle at the City of Wonders in a terrible state, telling him that apparently Iraina killed the Atlantean warlord Ku-Var who had sexually assaulted her. She then made an army out of women and lead them into battle with devastating effects.

While nightmares were plaguing Kull's sleep, in which he found himself drawn to the mysterious eyes of Iraina, only to come face to face with a vicious tiger, the female warrior arrived in the City of Wonders, asking to meet him alone in an hour. Brule followed Ram-Os as he slipped away, and discovered the old shaman leading an orgiastic ceremony amongst the warrior women outside the city, beseeching Ja-Quari the Tiger-God for victory in battle. Brule captured Ram-Os as he returned to the city, and interrogated him, learning the tale of Iraina's birth, and discovering it was Ra-Mos that was causing Kull's nightmares to undermine his confidence.

With Brule's help, Kull confronted and killed Iraina's mate, the royal tiger Kel-Jar, but the moon was already rising and the streets were running red with blood as the tiger army rampaged. Kull then sent Brule to summon the Black Legion, while he stayed to rid the empire of Irania. Ultimately, Kull at last snapped Iraina's neck and she reverted to human form. With the death of Iraina, and the passing of the curse of Ja-Quari, Kull's Black Legion found themselves fighting not an army of tigers, but an army of fetching young women in tiger skins. Ram-Os appeared and told Kull how he had deceived him, since it was always Kull's destiny to rule, not Iraina's. Without Iraina's vitality, Ram-Os could not survive, and died in Kull's arms. The tigress warriors were sent back to their homes, and peace descended upon the continent of Thuria once more.[10]

The City of Wonders became the capital of Valusia, seat of Kull's Royal Court, and the council chambers of the Senate.[11]

After a shepherd-boy named Sedrick saved his life, the Valusian knight Maxmelle took him to the City of Wonders as his new squire. Sedrick settled into his new life, but was a lonely outcast amongst the other squires and thus easy prey for Thulsa Doom. Drawn into the evil mage’s schemes, and plotting with him for months, Sedrick was given the command to begin their plan. Drawing off the guards with a lie Sedrick presented himself to King Kull.

Using his shepherd’s staff, enchanted by Doom, to summon Beast-Men into the throneroom, Sedrick betrayed Valusia and Maxmelle, who had trusted him. Attempting to escape, Sedrick ran into Maxmelle and sobbed out the whole story. Maxmelle rushed off to defend his king and died in the battle. Brule was about to kill Sedrick for his treachery, but Kull stayed the Pict’s hand, knowing Thulsa Doom’s punishment for failure would be worse. Doom appeared and transformed the boy that betrayed him, as well as Kull, into an orange cat. Immortal, it would live until the end of the world.[12]

When Kull was missing, Gonar transported Conan and Red Sonja to the City of Wonders, to have the Cimmerian impersonate the Atlantean monarch; meanwhile the shaman sent Sonja to bring back the real Kull, five-hundred years in the future, during the Great Cataclysm. While the Cimmerian and his allies were fighting Thuronolos, Kull reappeared and killed the shadow-priest, so Conan and Red Sonja could return to their time.[13]

Like this? Let us know!
Retrieved from "https://marvel.fandom.com/wiki/City_of_Wonders?oldid=5717124"
Community content is available under CC-BY-SA unless otherwise noted.