City of the Space Gods 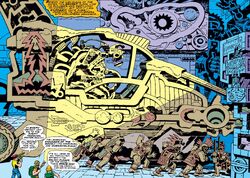 The City of the Space Gods was a network of ancient Incan temples located in a secret region high in the Andes Mountains. Centuries ago, it was visited by the Third Celestial Host. The Incan natives built the temples in honor of the Celestials, whom they regarded as Space Gods. They created a great Galaxy Plaque made of stone carved in the likeness of an ancient space craft. They also carved a stone facsimile of a three-passenger descent vehicle which hung suspended in one of the chambers. Beneath one of the temples was an underground water channel which led into a massive well located in the courtyard of the God Chamber.[1]

Several years ago, the Eternal Ikaris, masquerading as a camera-man named Ike Harris, led archaeologist Doctor Daniel Damian and his daughter Margo on an expedition to find the lost City of the Space Gods. They succeeded in this task and found the hidden God Chamber. Ikaris located the Cosmic Beacon which signaled the coming of the Celestial Fourth Host. At this time, the Deviants, led by Kro, invaded the City and fought against Ikaris. Ikaris managed to turn back Kro's forces and proceeded to the Resurrection Crypt where he revived his old friend Ajak, whom the Incans referred to as Tecumotzin - the Lord of Flight. Ajak was the only one who could communicate with the Fourth Celestial Host. From a special booth behind the Cosmic Door, Ajak opened a channel to the Gods. Arishem the Judge descended from the Celestial ship and stood upon a ceremonial pylon in the courtyard of the God Chamber. Arishem's entourage sealed off the God Chamber and guarded it against trespassers while the Celestial stood in judgment over the planet Earth - a proceeding that was destined to span more than fifty years. A giant, glowing white shield was erected over the city. [2]

God Chamber
The God Chamber was the central temple in the City of the Space Gods. The inner catacombs of the chamber were littered with large reliefs depicting the coming of the Celestials. Within the God Chamber was a large water well, the Cosmic Beacon, the Cosmic Door, and the Resurrection Crypt. It also contained a giant telescopic view-finder which enabled an individual to peer into the deep reaches of outer space. It was from here that Ikaris saw the coming of Arishem and the Fourth Celestial Host. The courtyard of the God Chamber was the scene of battle between Ikaris and the forces of Kro and his Deviants.

Cosmic Beacon
Located in the heart of the God Chamber, the Cosmic Beacon could only be activated by an Eternal. Once done so, it sent out a signal across the universe alerting the Celestials.

Cosmic Door
The Cosmic Door was similar to a flight control room. Sealed behind a massive stone wall, it could only be opened by a special trident key. It was here that Ajak opened a channel of communication between the Eternals and the Celestials.

Resurrection Crypt
The Resurrection Crypt was the tomb of Tecumotzin, the Eternal known as Ajak. When Ajak and his soldiers' bodies were reduced to free-floating atoms, they were sealed inside the chamber until such time that their bodies could be reconstituted.

Ceremonial Pylon
The Ceremonial pylon was a massive stone pillar that rose from the courtyard of the God Chamber, ready to receive the first of the Celestial Host. The pylon could only be activated from a special booth beyond the Cosmic Door. Arishem the Judge of the Fourth Celestial Host came to rest upon the pylon when he stood in judgment over the planet Earth.

Like this? Let us know!
Retrieved from "https://marvel.fandom.com/wiki/City_of_the_Space_Gods?oldid=6510605"
Community content is available under CC-BY-SA unless otherwise noted.