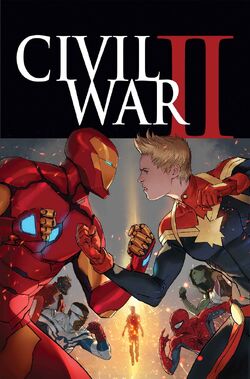 An Inhuman precog named Ulysses Cain who had recently been brought into the Inhumans helped save the day from a Celestial Destructor when Medusa used the information from a vision he had to warn the Avengers. During a celebratory party, the heroes discovered the source of the Inhuman's knowledge. Captain Marvel wanted Ulysses to work with the Ultimates, in order to preemptively tackle disasters before they happen, but Iron Man opposed the idea, suggesting it was dangerous to take his visions for granted for several reasons. The fact that it was possible to prevent the events Ulysses saw meant he didn't have access to anything set on stone, additionally, little was known about how Ulysses' powers worked, including their efficacy. Tony also brought into question the morality of stopping and punishing somebody for a disaster they could potentially do, and might not even know they'd do, however, Carol remained adamant in using Ulysses, considering it had worked perfectly in stopping the Celestial.

While he initially only warned his fellow heroes in the need to be careful about Ulysses' visions and what course of action could be taken based on them, Iron Man eventually set out to prevent Captain Marvel from using Ulysses ever again after an attempt at preemptively stopping Thanos led to the death of War Machine and She-Hulk ending up in critical condition.[2]

Fueled by grief, Iron Man infiltrated New Attilan and kidnapped the young Inhuman in order to properly study and analyse his powers, but not before entering into a brief scuffle against Queen Medusa, Crystal, and Karnak. Captain Marvel, the Avengers, and the Ultimates tracked down Tony after convincing the Inhumans to let them deal with Tony by themselves. When Tony was confronted by his colleagues, Ulysses experienced another vision, one in which a rampaging Hulk killed them which projected to everyone present.[3]

In light of this vision, Tony agreed to let Carol go talk to Bruce Banner as long as she wouldn't try to detain him without any proof he would Hulk-out. Tony and Carol tracked Banner down to his secret laboratory in Utah and confronted him. It was soon discovered that Banner had been experimenting on himself with Gamma cells even after having being depowered. When this information came to light after Beast hacked into Bruce's computers, Banner lashed out at his peers. His rant and his life were cut short when an arrow hit him in the head, killing him. The perpetrator, Hawkeye, was placed in trial for Banner's murder, and it was discovered Bruce had tasked Clint with the task of taking his life with a special anti-Hulk arrow tip if he ever was to Hulk out, and Clint claimed that he had seen Bruce's eyes flick green before shooting him.

The tension between Iron Man and Captain Marvel only increased, and Tony blamed Carol for Banner's death, claiming that she caused it with her actions.[4]

Some time after Hawkeye's acquittal was handed down, Tony assembled a group of heroes, including Captain America, Medusa and Captain Marvel herself to reveal that he had discovered the way Ulysses' powers worked. Tony revealed that his brain automatically absorbs data and energies cascading from all over the world in order to create his visions, which are nothing more than the result of a complex algorithm, with an actual probability percentage of ten percent. Even in the light of this reveal, Carol, remained adamant of using Ulysses's powers, which prompted Iron Man to make the situation public, causing a rift in the superhero community that quickly escalated to a confrontation between Iron Man's and Captain Marvel's sides at the Triskelion.[5]

An intense fight ensued leading to the Triskelion being heavily damaged, and the Guardians' ship C.I.T.T. being destroyed by Vision. The Inhumans soon arrived to aid Captain Marvel's side. The conflict was halted when Ulysses had a vision of Miles Morales killing Steve Rogers in Washington, D.C., prompting Captain Marvel to order Miles' arrest.[6]

However, Steve Rogers prevented this by asking Thor to take Miles back home. Carol attempted to chase after them, but she was restrained by Ms. Marvel. Maria Hill told Iron Man and his allies that they were under arrest for attacking the Triskelion. She was interrupted by Black Panther who stated that he no longer supported Captain Marvel and her cause. While Hill was preoccupied, Doctor Strange cast a magic spell that transported himself, his allies, and Panther away from there. Iron Man and his allies took shelter in one of Nick Fury's old bases. When night fell, Hill informed Carol that Miles had been found in Washington, D.C. in front of the Capitol Building.[7]

Captain America soon arrived to the very same location. Shortly before the two heroes are confronted by Captain Marvel, Ulysses experienced a vision that transported him to a future where its Wolverine warns him about Tony's actions. Before Captain Marvel could convince Miles to come with her, Iron Man stepped in to stop Carol, breaking out into a fight.[8]

As an arduous battle unfolded between the two former friends turned enemies, the Inhumans, Alpha Flight, the Ultimates and the X-Men flew to the scene to stop them. Unwilling to hold back, Captain Marvel eventually wore off the defenses of Iron Man's armor and destroyed it, causing Tony to succumb to the injuries. Meanwhile, Ulysses had experienced another trance, with his powers causing him to jump through different futures until he was confronted by Eternity. The sentience of the universe stated that Ulysses had now transcended humanity, and was welcome to join him in a new place of existence. Ulysses accepted, and vanished, much to Captain Marvel's dismay.

Tony Stark's body was taken shortly after to the Triskelion, where Beast discovered that secret biological enhancements in Tony's body were the only thing that had kept it alive. Tony remained in a stasis pod, where Beast could further investigate his condition.

Some time later Carol, was invited by the President to the White House, where she reported that the fallout from the war caused both positive and negative developments in the superhero community. The President allowed Captain Marvel to ask for any favors, and she stated she had some ideas for the future.[9] 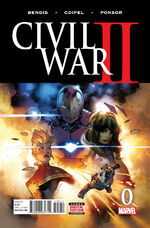 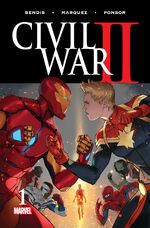 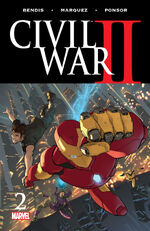 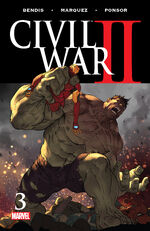 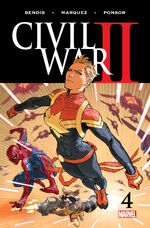 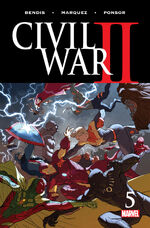 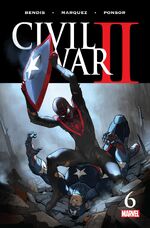 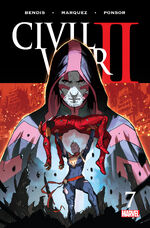 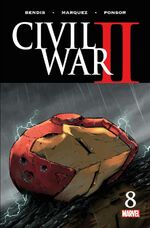