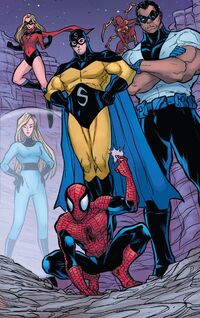 Base of Operations
Battleworld
Affiliations

The Civil Warriors were a group composed mostly of inhabitants from a world where Iron Man had become president of the United States after the Civil War. They were the combined remnants of that world's Avengers and Thunderbolts, joined by the Sentry of Earth-1611.[1]

The Avengers were abducted by the Maestro, who brought them to Battleworld on Earth-15513 to have them fight the other unwilling contestants of his Contest of Champions. In order to incite conflict, Maestro altered their memories so they believed they hadn't left their home reality, and the contestants were unregistered heroes they were pursuing. With the help of Reed Richards, the Thunderbolts traced the teleport trail back to Battleworld with the intention of retrieving the missing Avengers.[2]

An all-out battle broke out between the three groups of heroes, and it was interrupted when President Stark, the Iron Patriot, killed Thunderbolt leader Steve Rogers and revealed he was in posession of the Reality Stone, which he had used to subtly reshape reality numerous times back in his home dimension. Iron Patriot tried to use the stone to subjugate the fighters, but he couldn't due to the stone's major limitation, it only works fully on its home reality. The Maestro arrived to the scene, killed Stark, and ordered the contestants to fight him. Maestro's victory was cut short with the help of two contestants he believed dead, Stick from Earth-616 and the aforementioned Sentry.

The contestants native from Earth-616 were sent back to their reality, while the remaining members of the Avengers, the Thunderbolts and Sentry decided to stay behind in Battleworld to protect its deposit of Iso-8 from any interdimensional invaders who attempted to get their hands on it.[1]

Retrieved from "https://marvel.fandom.com/wiki/Civil_Warriors_(Earth-15513)?oldid=4924084"
Community content is available under CC-BY-SA unless otherwise noted.